I've had the Ameritron ATR-30 3KW antenna tuner for a while, and I thought that it would be neat to show some inside pics and also give a brief review of this tuner.

Here is a pic of the front panel of the tuner. It has an active peak reading cross needle meter, an on/off switch for the meter and inductance turns counter meters, high/low and peak/avg meter switches, antenna switch, and the usual capacitors and inductor knobs. 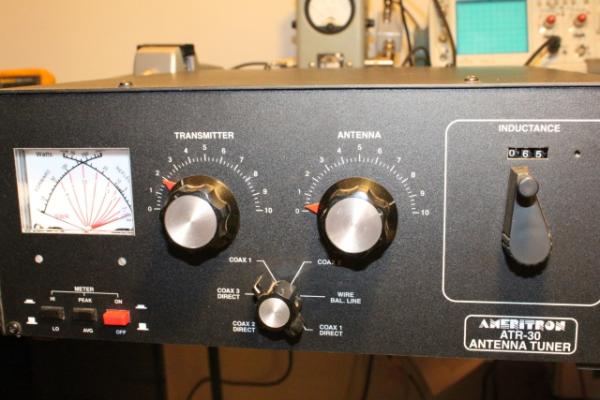 Note that the inductor is a roller inductor for infinite tuning adjustments.

Here is the back side of the tuner: 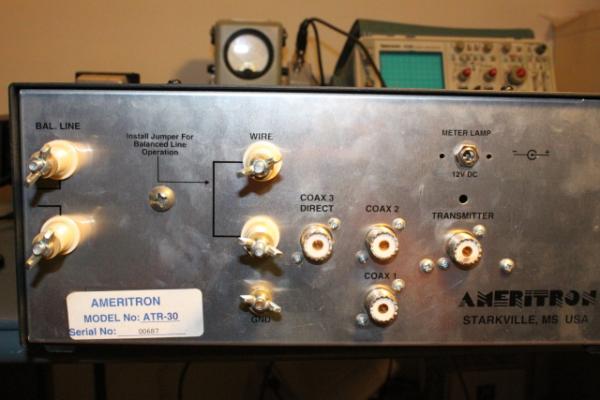 Here is an inside pic of the tuner. The size of the capacitors, inductors, balun, and antenna switch is what enables the 3KW handling. 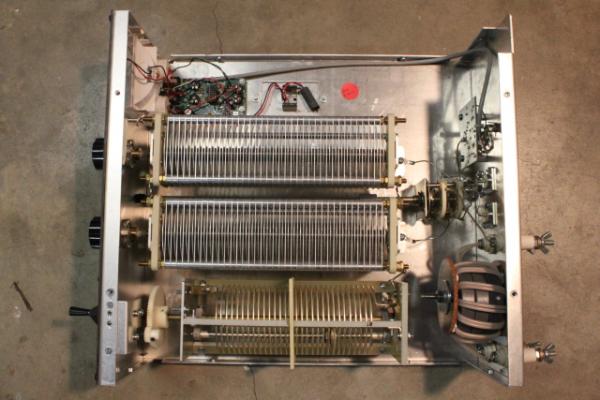 Here is a close-up shot of the silver plated roller inductor with my hand in it for perspective. Just below my index finger you can see the roller that provides the tap on the inductor. 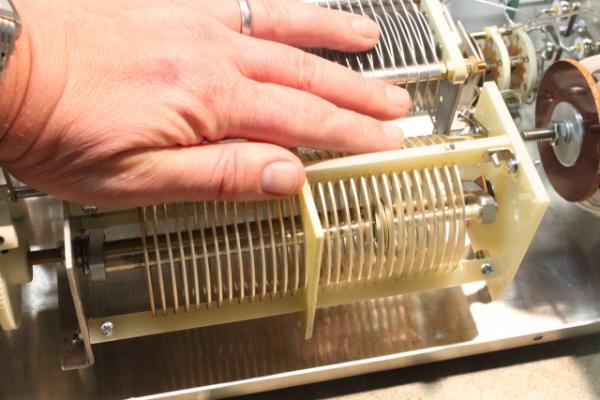 The front side of the roller inductor has gears to work the inductor turns counter. This is a very simple, but effective design. The turns counter on this tuner isn't the most precise thing in the world but when you record your setting, it does give you a number that will get you pretty close so you can quickly recall your previous position when you change frequencies. 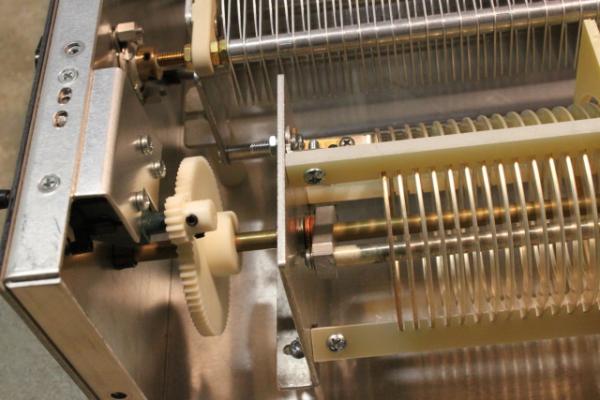 Here are the tuning capacitors. Again, my hand shows the size necessary to handle 3KW: 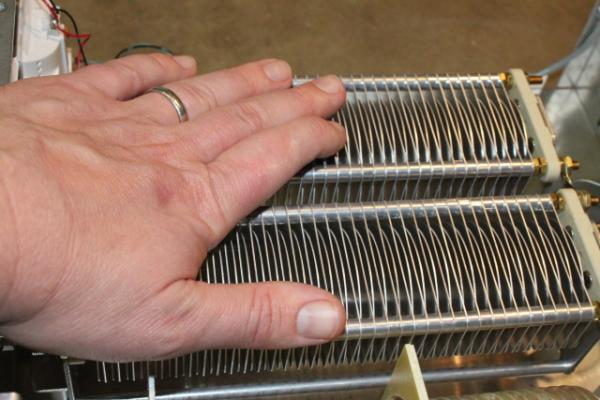 Here is the massive balun for the ladder line connection: 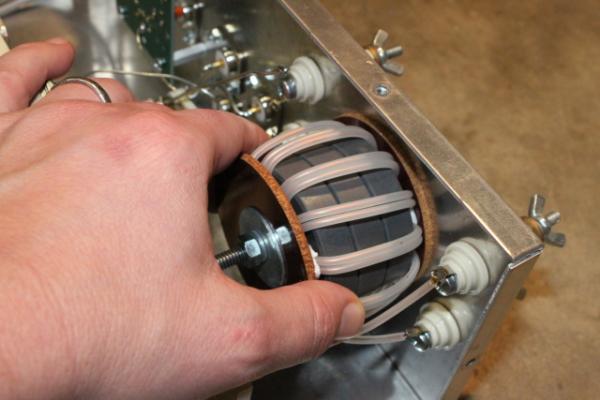 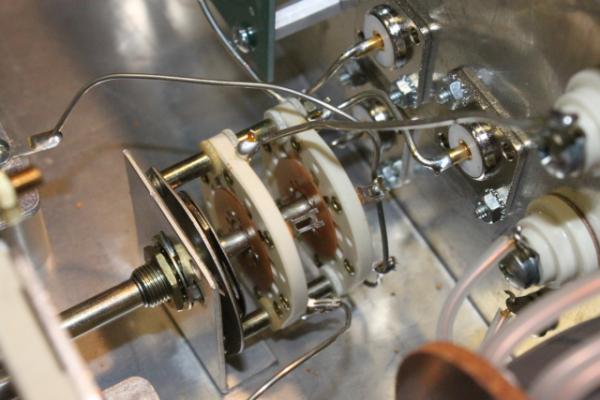 And lastly, the meter circuit board: 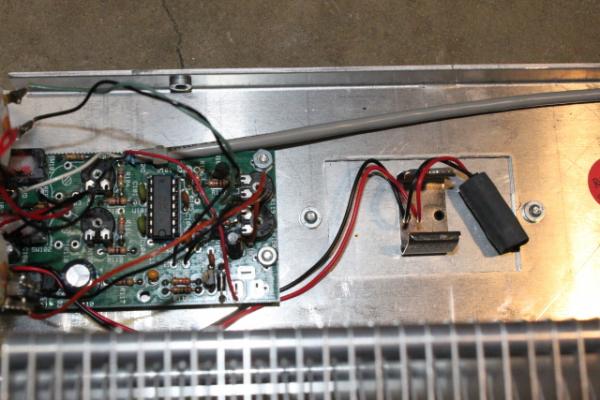 I've owned this tuner for several years, certainly long enough to give a qualified opinion on it's effectiveness. I can happily say that I have never had any issues with it. The large roller inductor and tuning capacitors have enabled me to obtain pretty much a perfect match on anything I've tried. The inductor and capacitors aren't nearly as "smooth" to the touch as more expensive units from TenTec and others, but this tuner is also quite a bit less money.

The size of the cabinet and components used allows for plenty of air circulation when using high power levels. I have put over 2KW through this tuner (MARS stations have higher power level limits while operating on MARS frequencies) and never had one single issue.

My only real complaint about this tuner is the size of the meter. I would have liked to have seen a meter that is twice the size of the one provided. The built in meter will allow you to load up your antenna, but you cannot use it to obtain precise power level measurements. I almost always use an external large cross needle meter to adjust the tuner because I find the external one easier to read and I can obtain much more precise results.

The price of this tuner is about $600 new. If you don't need this much power handling capability, Ameritron and MFJ offer several others for less money. However, if you want a reliable, basic but effective tuner that will handle well above legal limit power, this one will certainly do the job for many years.

Nice review, been looking at these and other tuners. It helps me make up my mind a bit.

Been looking at auto tuners also. I need a tuner which handle a ameritron 811 amp.

Ameritron lists this tuner for about $600, but you can find them used for a lot less. I bought this one used. A manual tuner is one of those pieces of equipment where there just isn't a whole lot to go wrong. Even if it does need some repair, it isn't very difficult to do it yourself.

Here's one for sale right now on ebay for a great price:

Auto tuners are very nice and very convenient. However you pay a huge premium for one that can handle legal limit plus power. Also, most auto tuners cannot always tune every antenna or get a perfect match. You can almost always do that with a good manual tuner. When you're dealing with high power levels, I'll take a manual tuner every time - there are just less a lot less things that can go *poof*! in them.
Reactions: Heavy Metal

moleculo said:
I'll take a manual tuner every time - there are just less a lot less things that can go *poof*! in them.
Click to expand...

I have had a lot of different tuners, but my ATR30 is by far the best one. Can tune from 160-6 meter.
Rich
Reactions: Heavy Metal

You bring up a good point. The specs and manual indicate that this tuner is only good up to 10 meters, but it works great on 6 meters, as well.
H

Thanks for taking the time to post this.
S

Good review and I agree with these manual tuners and less going wrong. About the only way to kill them would be operator error over powering or arcing.

This is a Nice Tuner,

The draw back is that the roller inductor cannot handle over 1kw for very
long on 160 mtrs,the nylon will begin to melt-I had one for 3 mos yrs ago
and used it on 160 cw contesting-I was matching a 5/8 wave Inverted L
with 72 -1/4 wave radials running 1200 watts-it operated fine under 700w
but still got warm.I have a L/C auto tune at the base of the antenna now,but
my tuner also is a Nye Viking MB5A-never arcs over or gets hot.Good luck and
enjoy .73/44s/Dx.

what does this thing tune?

North Texas Mudduck said:
what does this thing tune?
Click to expand...

Pretty much anything it's connected too.
H

I've had mine for a few years now. When I first got it I too noticed it getting a bit warm on 160M. I also noticed the roller wasn't as smooth as I thought it should be.
Inspecting the inside, I found the rear of the roller loose and the contact strip was a bit loose.
I don't remember what I did now to correct the problems but I do remember it was a quick easy fix.
It's been working GREAT since then.

Old thread but I have a couple comments.
I have had one for about 3 years now. Got it from Gigaparts for $450 shipped. A pretty good price at the time.I waited for a used one to show up on Ebay and QRZ.com but when they did the price was always too high, almost the same as a new one.

I like the tuner and it does fine with an AL-80B on any band. The fit and finish could be better on mine. The front panel could go 1/4" lower to cover the bottom of the chassis and the top cover is a bit cockeyed on the right hand side so there is a gap at the top right corner. I can fix that myself but it isn't very impressive.

The roller inductor counter is different than others I have had. It counts higher as you go up in frequency. So On 160 where you would have a lot of inductor being used the counter would read 005 and on 10 meters where you wouldn't use much it indicates around 80. It is a 3 digit counter that never quite gets to 100.