I have a apollo 500 linear amplifier that in hi or low power I get a pop and spark from relay when keyed. No power loss. I have cleaned the relay but did not help. Any ideas on problem. ??
Last edited: Oct 3, 2022

Better chance of repair success to replace the relay. The Apollo amp is an old relic. The relay has probably been cleaned many times. But, cleaned correctly? I have seen folks take a bit of sandpaper or other coarse object to relay contacts and foul them up royally.

A new replacement relay now will more than likely be cheap enough and probably would outlive most of us on this forum.

I saw a guy use a dollar bill to clean some relays. It was interesting to see but still needed relays.

Not all relays are created equal. And a small spark every time you unkey eventually adds up to a rough surface on the contact points. Most small relays are not designed so you can burnish the pitted contact surface, like you would for a large power relay. When contacts are worn, you replace it.

If the relay is as old as the amplifier, there's no good reason to trust it. Couldn't find a diagram of the thing. There is more than one way to shut down the tubes on standby. Odds are that the section of the relay that arcs is the one that shuts down the tubes. Some amplifiers cut the high voltage off to place the tubes in standby. An amplifier like that with high mileage will have that section of the relay worn out by now. Amplifiers that open the cathode circuit on the low-voltage side of the tubes for this purpose won't arc as much to begin with.

Gotta wonder if there's a four-digit date code on the old relay.

I think the radio that wore out a relay fastest was the Siltronix 1011. Granted, it was the same radio that Swan sold in several models, but with only one band. Didn't have as much experience with their multi band radios. The 1011's relay contacts would show a significant spark every time you keyed the mike, and unkeyed. A radio in heavy use would need a new relay after two or three years. The radio used the "brute force" method to switch between transmit and receive. It would shut off receiver B+ to transmit, and turn off transmitter B+ to receive. The side that was turned off would be connected to ground. This made sure the 'other' side of the radio was turned off completely. Tried adding capacitors and a series resistor/capacitor "snubber" across the contacts, but it didn't help all that much.

Just a part of the design.

Checked blocking disc capacitors and they are ok not sure if I can increase value cannot find any info. I have been suggested to check tubes for a plate voltage short and doing that this weekend. thanks for the replys.

Tubes ok so that was not the problem . The relay looks good and keys like it should but with a nice loud pop and spark every 3 or 4 key up. Beautiful amp any more ideas???????

I'm gonna guess that the pole of the relay that arcs is the one that switches the high voltage on when keyed, and off for receive.

Just how "good" the contact points look still has me skeptical. Just how closely did you inspect the contact surfaces? Can't find a diagram for this one yet. Leaves open the question of which part of the circuit gets interrupted to shut down the tubes in receive mode. There are a handful of ways to do this. Every amplifier designer seemed to have his own personal favorite "secret sauce" way to do it.

Can't offer much of an opinion without a schematic, at least.

This is not a "they all do that" kind of fault.

Nomadradio I cannot find a schematic for amp nowhere. The contacts do not look bad to the eyesight. I am sure you are right about it switching high voltage on one set of points. I wonder could i put another 3ptdt relay in it and just have that relay use all 3 contact points to switch the just the high voltage and have it make a difference? 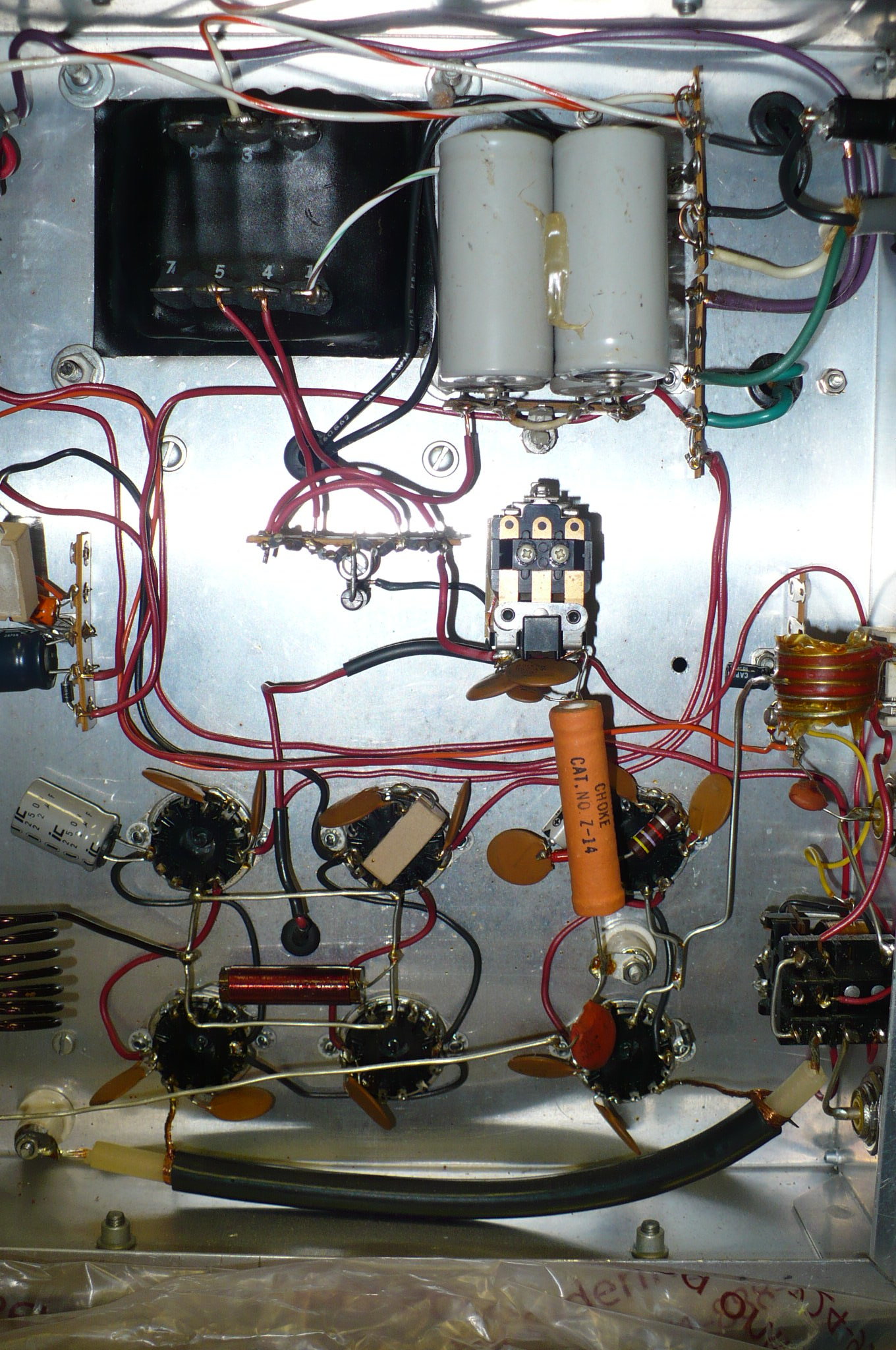 Okay, Jimbo. So now I'm confused. Does the picture above look like the underside of your amp? Does yours have one relay or two?

nomadradio said:
Okay, Jimbo. So now I'm confused. Does the picture above look like the underside of your amp? Does yours have one relay or two?

I picked up a Apollo 500 amplifier at the MIS hamfest it is in great condition and works perfectly. It is a 6 tube amplifier that has 6lf6 tubes in it. I cannot find any information anywhere about this amplifier has anyone seen or heard of this model amplifier?? I tried to unload picture but...

www.worldwidedx.com
its his from a old thread.
He must be talking about the hv relay...looks like a shorting bar

Jimbo165 said:
I have a apollo 500 linear amplifier that in hi or low power I get a pop and spark from relay when keyed. No power loss. I have cleaned the relay but did not help. Any ideas on problem. ??
Click to expand...

What type of relay is it?