Biggest Antenna on the Planet

Shockwave said:
"Jim Creek achieves its worldwide range by transmitting a very powerful, very low frequency (VLF) signal, one with a wavelength of approximately seven miles and a frequency of only 24.8 KHz."

That power and frequency is very alarming to wildlife in the ocean and proves the claims it harmed thousands of dolphins, is absolutely true! This frequency range is dead center in the dolphins normal hearing bandwidth which extends to 50Khz. Obviously we need to communicate but don't pretend it didn't have consequences.

PS: Your dog can hear to 45 Khz. Wonder how they behave around that transmitter site? This transmitter is essentially a high powered, modulated dog whistle.
Click to expand...

I seriously doubt they can hear it. If they could, we could hear the powerlines at 60 cycles. And consider the amount of power going through those.
S

WECSOG said:
I seriously doubt they can hear it. If they could, we could hear the powerlines at 60 cycles. And consider the amount of power going through those.
Click to expand...

Keep in mind, we are told line frequency does not radiate at 60 cycles. On the other hand 24,800 cycles, seems to radiate enough for the signal to have a global reach...

Check out stories of "beached dolphins and whales during VLF testing". It's no coincidence that our Navy sonar and VLF radio communications mimic sea mammals because it is known they they can communicate over 800 miles. They don't use 2,000 kilowatts to do it either, and these man made systems are basically, on their channel because we found out how well it works.

"Am I getting out ?" The most energy efficient antennas, 4W in 2KW out lol (joke). Very impressive.

Regarding the lower frequency TX, that would need to breach the electromagnetic / acoustic planes to affect dolphins. I am not saying it did not. Did it directly stimulate the auditory nerves in their brains that are optimized for those frequencies ?(given our nervous system/brain activity is electrical impulses)
Last edited: Oct 10, 2020

Shockwave said:
How do we define what is sound and what is RF when the frequency in use, is both?
Click to expand...

Remember that the 24 kilohertz signal is a RADIO WAVE. Human ears may be able to hear an AUDIO WAVE at that frequency, but human ears cannot hear a radio wave unless there's a radio to receive and process it. No aquatic mammals have been harmed by RF.
Reactions: barefootindian, WECSOG and Captain Kilowatt

DXman said:
Big Kahuna,
Jim Creek has been doing some testing in the last 5 months or so, off and on. I yak with a guy that lives close to there in Arlington.
John says that his radio is use less at times on several of the bands, lots of heterodyne comes from Jim Creek.
Click to expand...

Interesting. I always knew it was there but I remember a year or two ago Russia said it was one of their missile targets and I looked it up on google maps and the scale of those wires and towers just blew me away. That entire valley is a giant antenna.
Reactions: Slowmover

Beetle said:
Remember that the 24 kilohertz signal is a RADIO WAVE. Human ears may be able to hear an AUDIO WAVE at that frequency, but human ears cannot hear a radio wave unless there's a radio to receive and process it. No aquatic mammals have been harmed by RF.
Click to expand...

Exactly. One causes compression of the air to make sound while the other excites electrons to generate RF. Quite a different situation.
Reactions: WECSOG and Marconi

Usually if I can hear em' I can talk to em'.

I listen to John’s stream daily when he posts it up. I knew it was big but wow, just wow.

There is even a thread on qrz on this antenna

You guys remember when the urban legend was going around that one of the radar techs in Alaska, would tune one of the HAARP arrays, High Frequency Active Auroral Research Program, to 11 meters and talk on channel 19. I remember hearing this one more than once that it was the origin of the phantom "I an't got no panties on." It was a guy talking on a HAARP array.

secret squirrel said:
"I an't got no panties on." It was a guy talking on a HAARP array.
Click to expand...

Not likely the U of Alaska prof who runs HAARP is a ham. Met him at a conference a couple of years ago. Wouldn't let that happen, don't think.

In December 1966 I received orders for two weeks' Naval Reserve annual training at Jim Creek. As a Radioman second class, this was a dream assignment. The orders included a map on how to get there, and to report to the Operations Officer when I arrived. Turned out he had been my Division Officer for two years on Kitty Hawk, and he had personally pushed my orders through the maze.

Another interesting VLF antenna is at the very tip of North West Cape, Australia. Browse with Google Earth and look for a hexagon with sides over a mile long. That's the place: named after Harold E. Holt, an Australian Defence Minister, I believe.
Reactions: secret squirrel, Shadetree Mechanic, WECSOG and 1 other person

Jaydean said:
Hi Folks
Just wondering if anyone's seen the new antenna that Motormouth Maul has just put up. I've never seen anything like it before. It has a 117 foot long boom and 16 elements on 27Mhz! Iv'e seen big antennas before but nothing like this. https://www.computer7.com/the-biggest-cb-antenna-on-the-planet/ 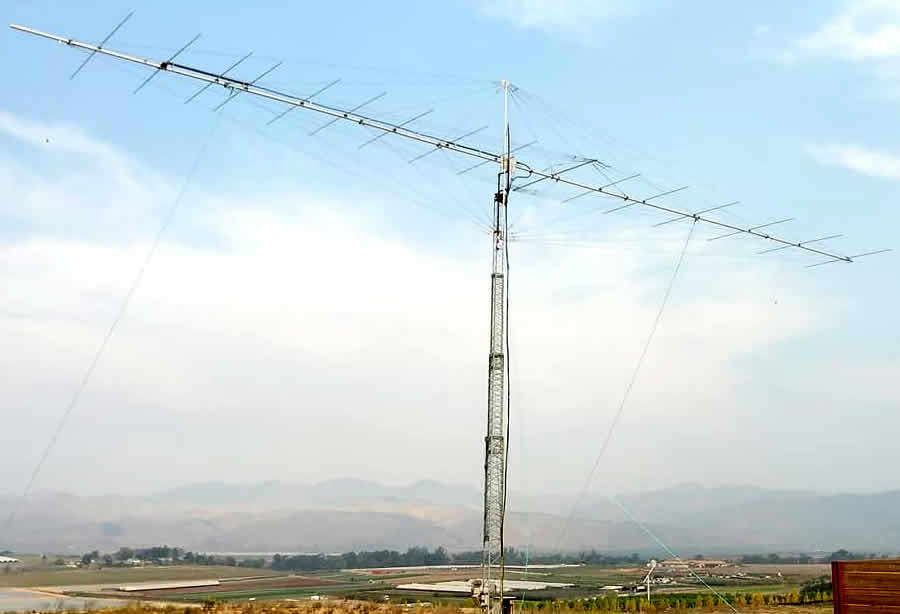 With an antenna like that it is not so much the rotational torque required as it is the braking force to stop it and keep it from turning in the wind.
Reactions: NZ8N, secret squirrel, Blackcat630 and 2 others