OK, here's one for you geeks out there. First off, I'm old and don't know squat about computers and how to use one very well. I can do email, type and print a letter, and write stuff on this forum, but that's about it. A couple of years ago I decided to get into PSK31 so, with the help of a friend, downloaded HRD. I used it for a while and then it quit working. We tried to get it back but never could. So I downloaded Fldigi and used IT for a while before it to quit me, too. :w00t: Then I downloaded Digipan and had fun with it for about a year, and then, you guessed it, it quit me. :headbang I can receive just fine, but it WILL NOT transmit. What's the deal??

I'm using an HP laptop and running Windows 7. Anybody have any ideas?

When you say that it "quit transmitting", what exactly do you mean? Does the rig even key into TX mode?
C

No. I click on the TX button and nothing happens. Also, when I click on any of my macros they print on my screen but don't transmit.

cycleguru said:
No. I click on the TX button and nothing happens. Also, when I click on any of my macros they print on my screen but don't transmit.
Click to expand...

It sounds to me like the CAT has stopped working. Double-check to make sure that the COM port settings match what your PC & Rig are expecting.
C

Thanks, I'll check that.

Using Win 7 you should be able to press the start button, type device- it will show in the search box and then click on device manager under control panel. 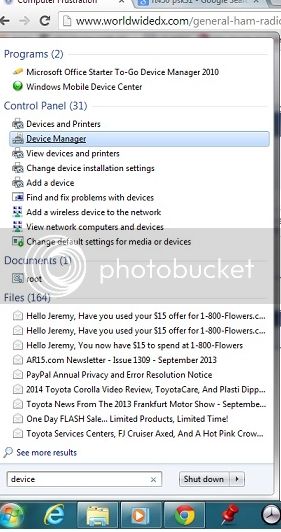 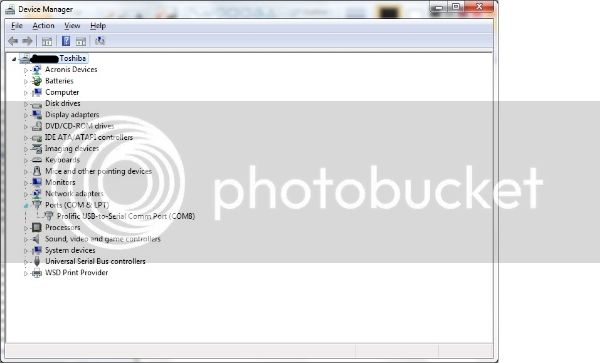 Q. That all went well until I got to the "device manager" page. I don't have a "ports" choice listed. ! ?
Q

What soundcard interface are you using? Is it plugged in?

Rigblaster Nomic. The weird thing is that after a normal PSK31 session I shut everything down as usual, then a couple of days later I fired everything up for another session and that's when it wouldn't transmit. I had not touched anything. Gremlins I guess. BTW, I've checked every connection 20 times. Thanks for all your help.

You could try a different USB port. Have you downloaded the drivers from westmountainradio? It just might be an issue with the RS232 USB adapter and Win 7
C

Yes, I did download the drivers. I'll try a different USB port and see what happens.

Are other USB devices on the pc working? Do you have another PC to check the cable on? Is this the same cable or did you purchase a new one? Reason I ask the last question is there are a lot of fake cables out there that just plain don't work.
You must log in or register to reply here.