I have radios every where. I have one in my work truck.
I have one in my wife's truck.
I have my shack.
I have radios in my shop and I have radios in my office at work.
I have a bug out box with radios to take to the farm.
The only thing I had with no radios in it was my old farm truck.
I decided the old (2004) F250 Super Duty FX4 should have a radio in it.
The issue is that it being an old diesel and only used maybe one weekend a month when I take the dogs to the farm and during deer season that I really did not want to spend much money on it. I decided not to buy any new stuff and just use what I had on hand. I rarely sell my old radios, I just box them up and put them in storage... never know when you might need a back up.
The first thing I thought about was what antenna to use for HF. I had a mag mount dual band antenna to use for the dual bander, so that was a no brainer... but what about HF.
I had a couple old screwdrivers on the shelf, so I got one out... and I mean old.. I took it off the wife's truck over 15 years ago... the drive motor in it was actually an old black and decker electric screwdriver motor...
I took that out and put a planetary gear drive motor in it... cleaned up the coil and the finger contacts... and then decided that this old truck occasionally goes thru heavy brush and low hanging limbs and something that bulky would not work well....so...
I had a piece of 2" by 1/2" aluminum flat stock and made a mount out of that to put a whip on...with a quick disconnect for easy removal when I got into the brush... 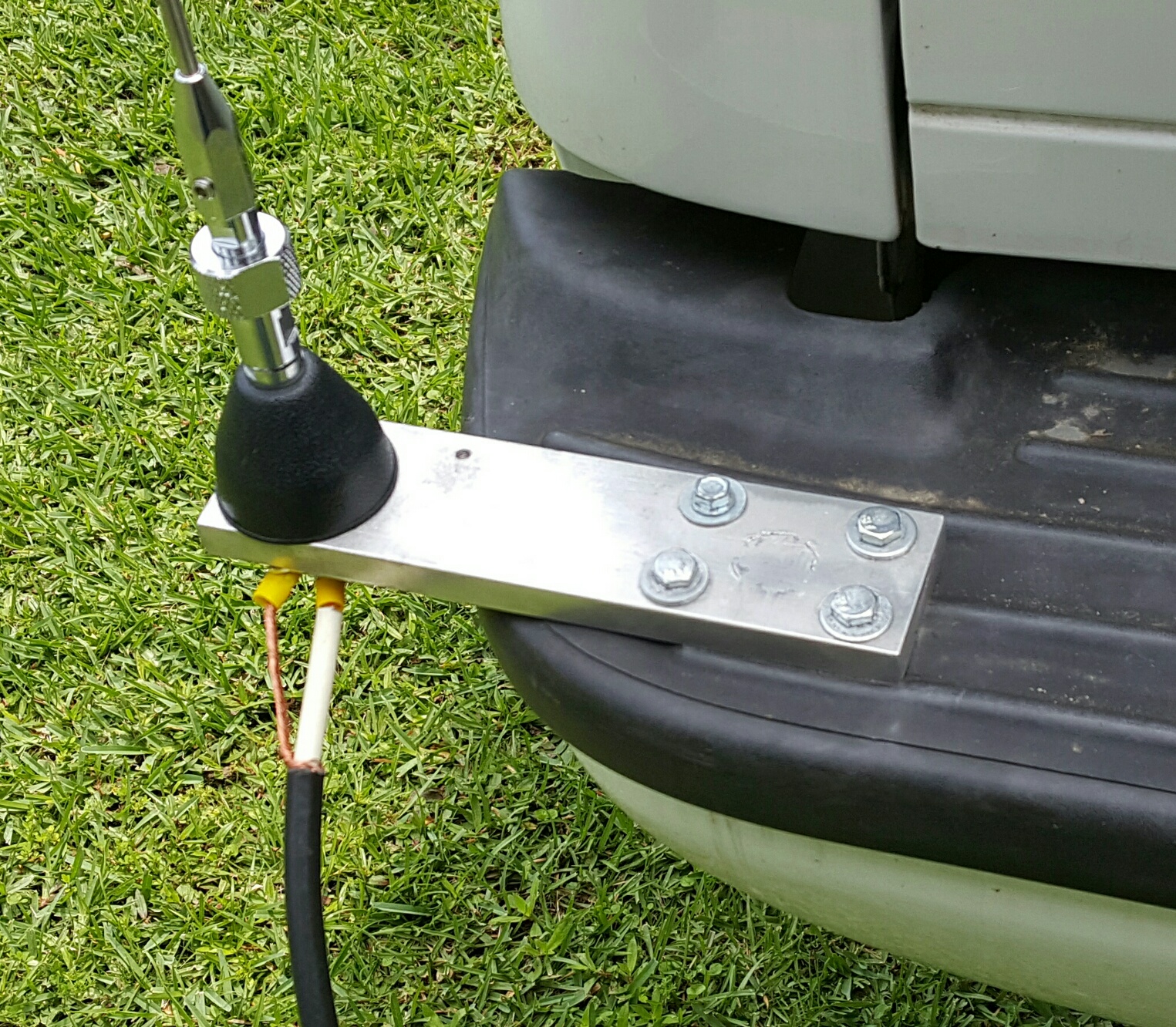 The next thing to think about was where to put the radios. The truck is a large truck but the way the dash is arranged and the console and seats, there is really not enough space there to put all the things I want to put in the truck... so I took the console out.
I said I did not want to spend much money... so how to mount the radios and the amp I decided I wanted, on the cheap, was something to consider... I decided to build a wooden console box... nice wood costs money...
so I had some 8" by 1" cedar fencing that was finished on one side and rough on the other... make the rough side the inside of the box and I could paint the outside to match the truck interior... 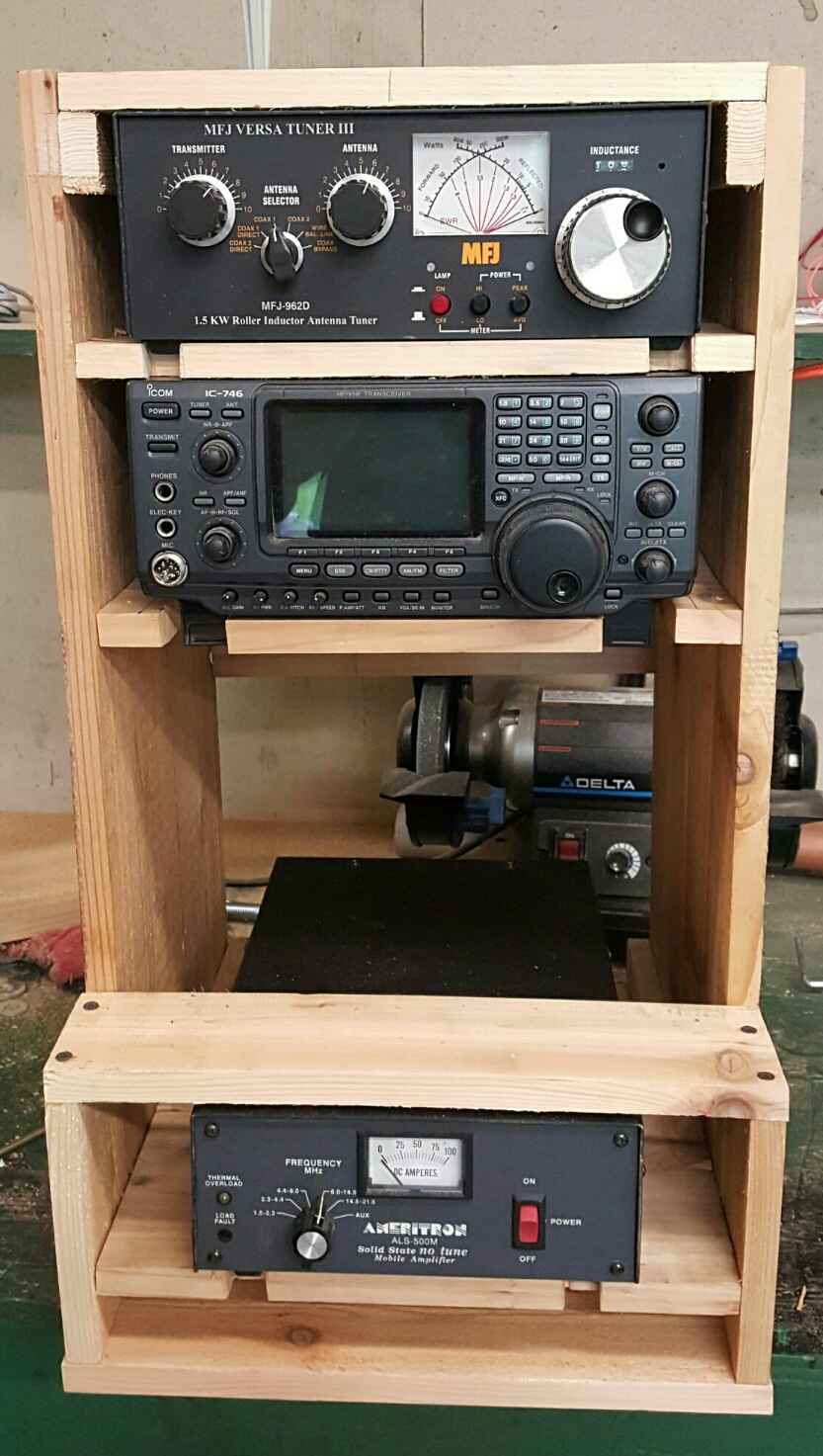 I had some RG213 and bulkhead connectors, that went in the box so when mounted I could hook up the coax from the antennas from the rear of the box 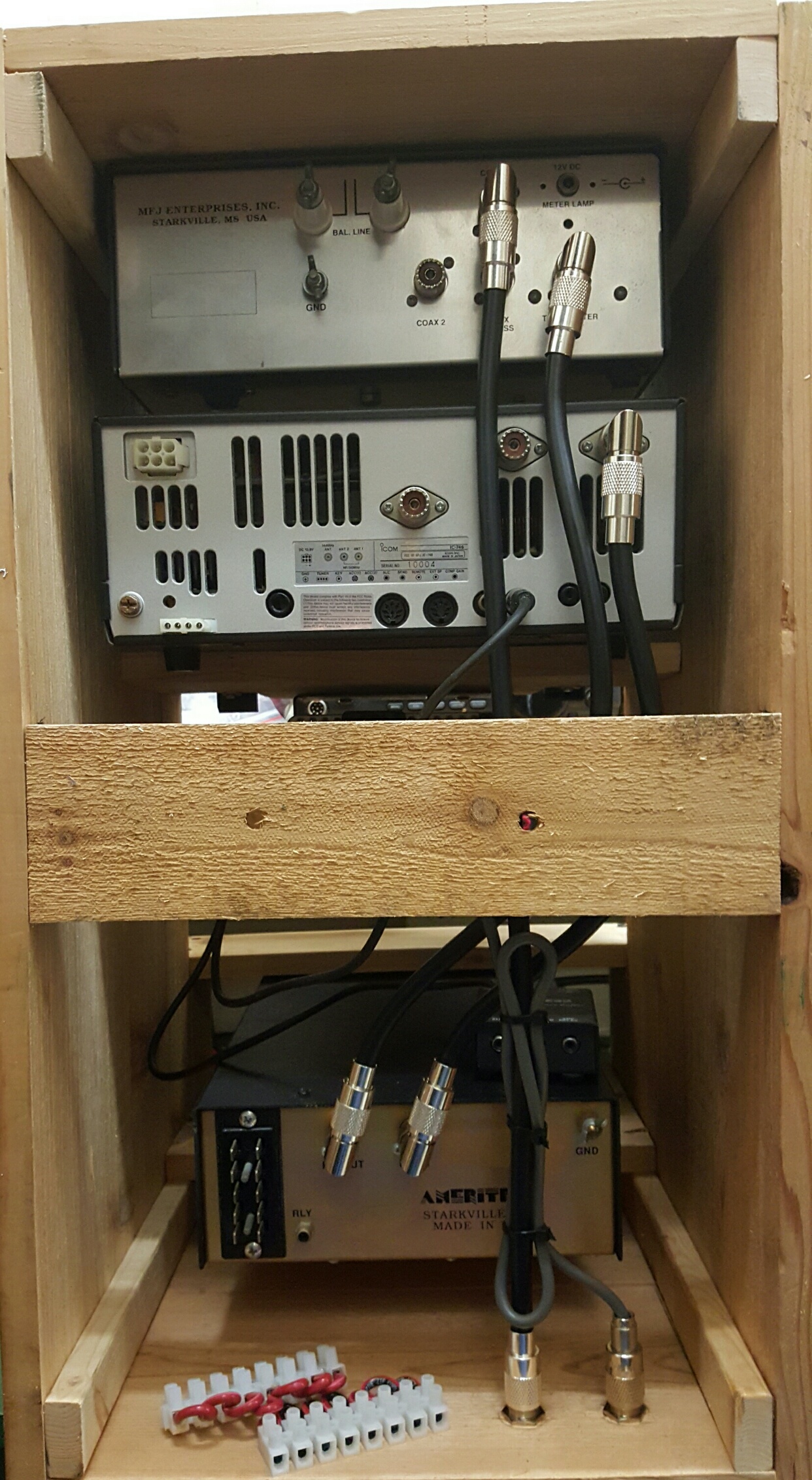 I did not take a picture of it, but the bottom board with the holes in it was replaced with a piece of aluminum flat stock that serves both as mount to the floor of the cab and a grounding point for the tunner and radios.
Last edited: Jun 13, 2016

Next came the wiring.
I ran #10 wire from the battery on the right side of the engine with both lines fused and a filter into the box. 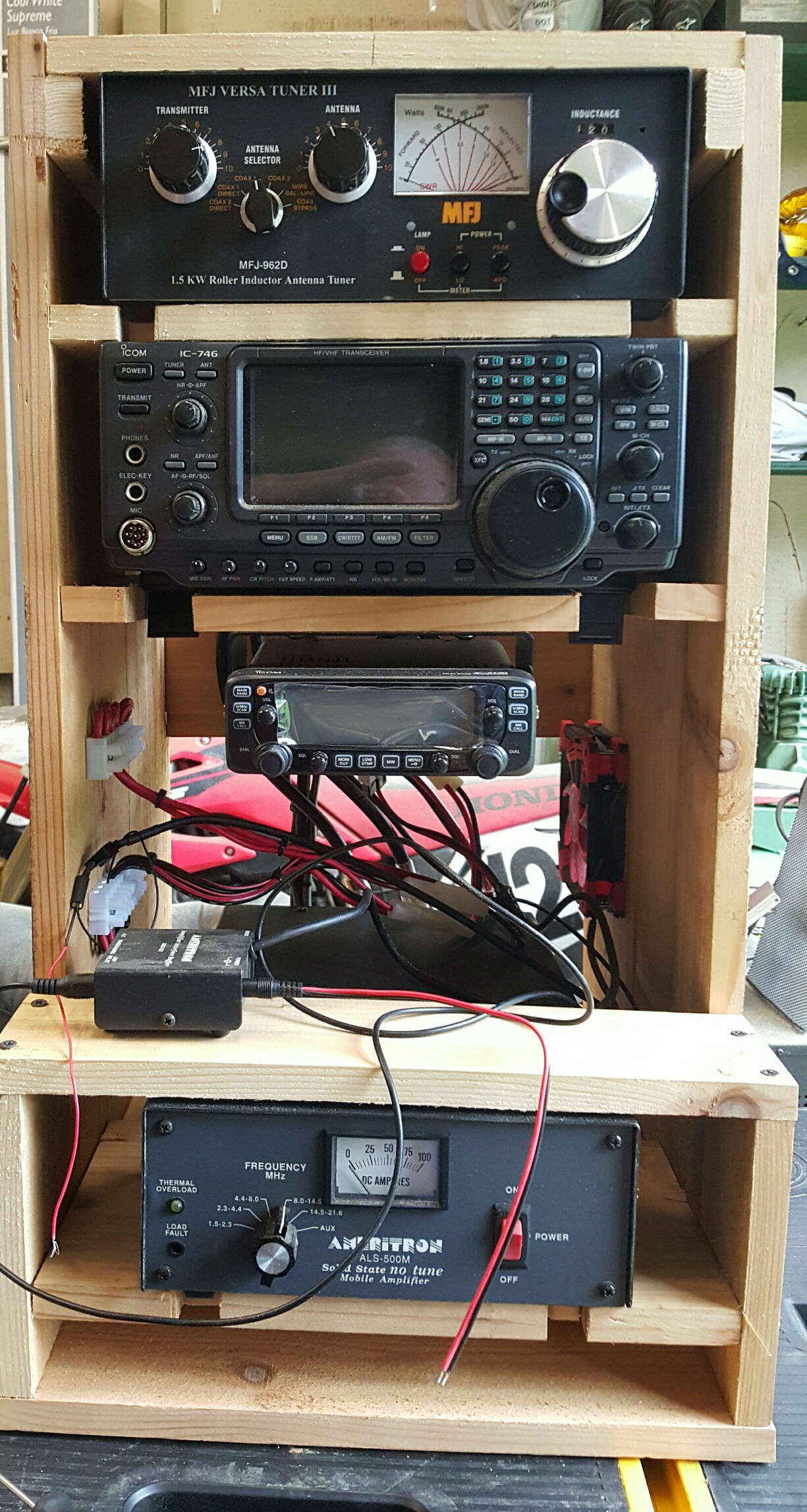 I also installed a fan on one side of the box because of the close mounting of the radios to increase air flow for cooling.

Then I set the box in place of the console. This is a side view of it when I first set in in before finishing the install 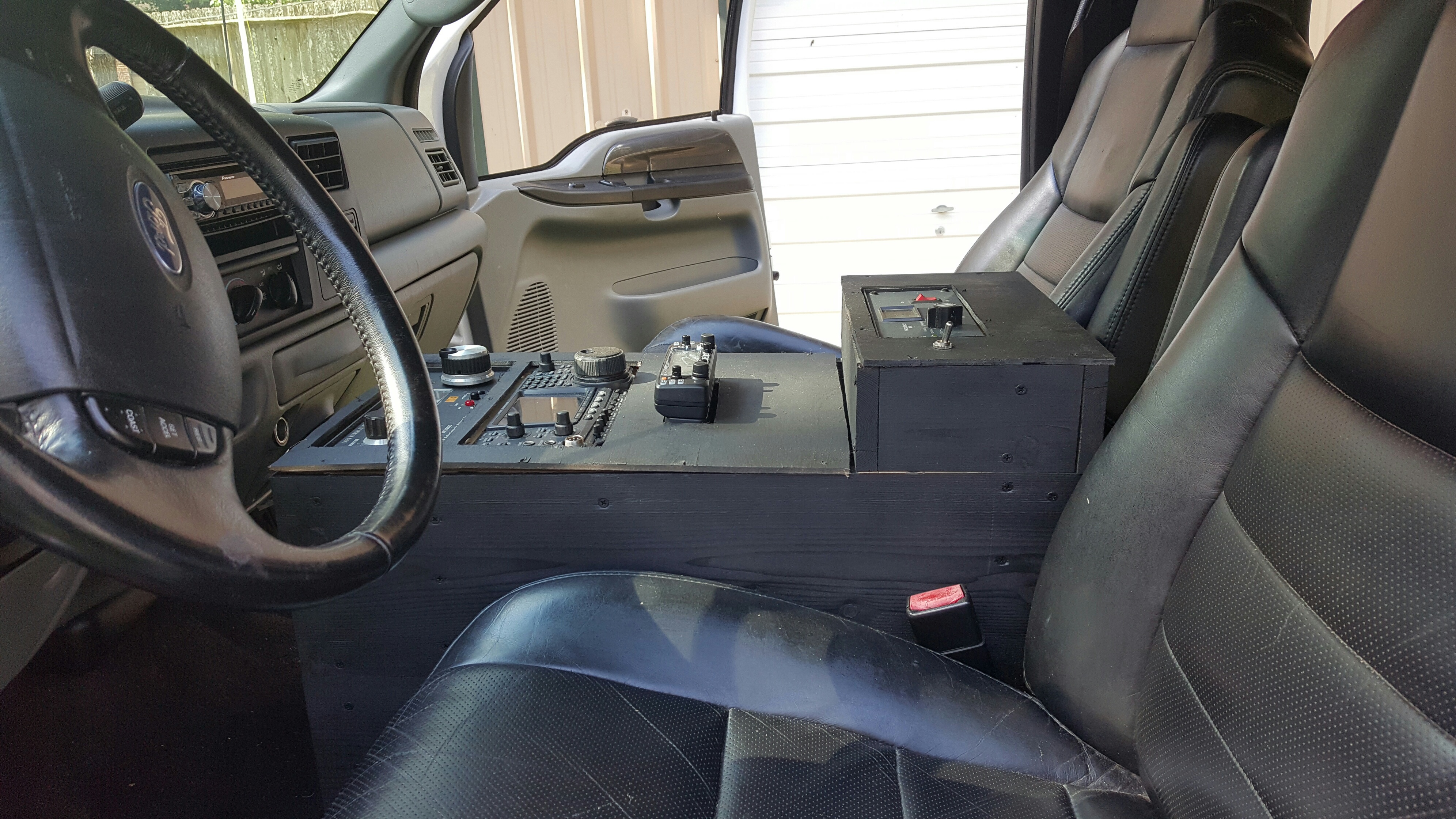 Here is what it looks like all completed with the external speakers... this is the view the dogs have... 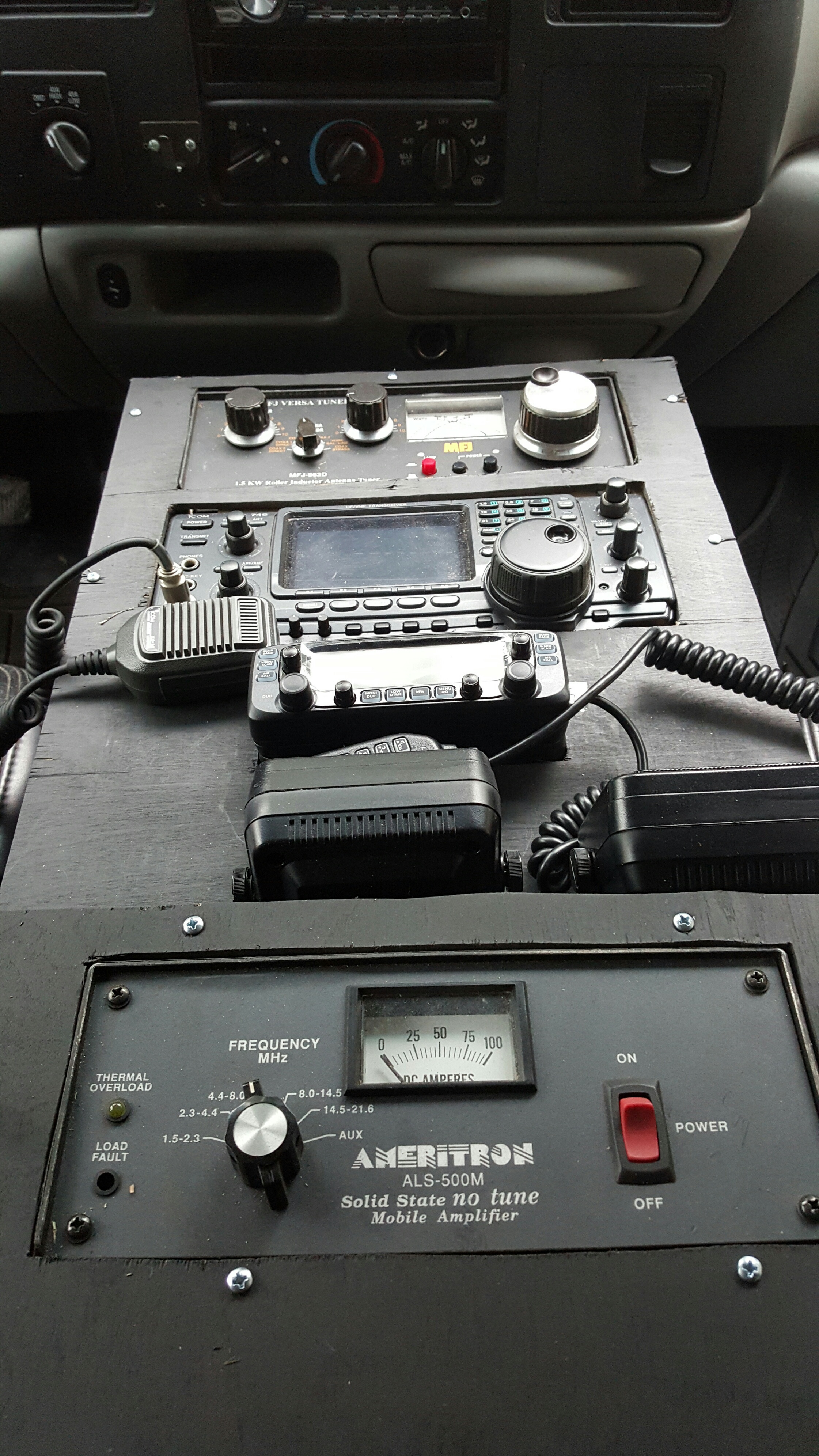 I figure it came out ok for the ground rule of not buying anything new and using what I had on hand.

That's one hell of a mobile station!...except what is your antenna?

If appears you are using a 102 whip with a tuner and if so, you have one major problem.

The coax length from the tuner to the antenna has to be less than 1 ft. long. Reason is because your coax length between the tuner and the antenna is longer than 1 ft. it's now becoming the missing length of the antenna especially on 40 meters since a straight whip has no loading coils or other matching network and this coax length will radiate like crazy. This also creates high voltages on this coax line and major common mode currents.

I would suggest using screwdriver antennas like the Little Tarheel HP which I use and handles 500 watts but is limited to 10 -40 meters. Or you can use the larger types if you want 80 meters.

If you prefer the whip/tuner combination, I would strongly suggest a remote outdoor tuner and couple it as close to the antenna feed point as possible.

This doesn't look pretty, but this the correct way a remote tuner needs to be installed on a mobile HF.

This is the Icom AH-4 Remote tuner. 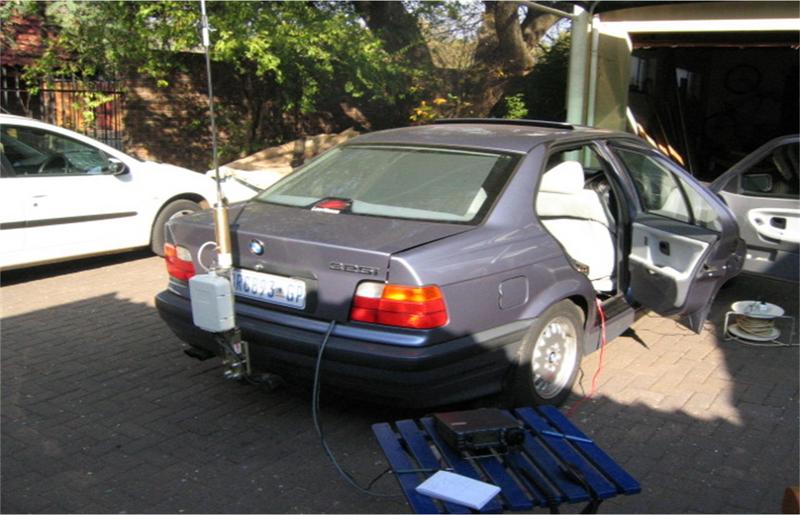 I understand your concern. I thought about that too and built a choke coil in line at the antenna... tested it both ways, with and without the choke and surprisingly it works just fine. I have had the same issue at power with end fed antennas before too...worked fine at 100 watts and got feedback into the shack at above 200 watts...
oh, and this is the second time I have done this same style installation... the reason I have this to begin with is that it used to be installed in my previous F250.

The choke coil will help alleviate the common mode current, but the issue of the coax radiating as part of the missing antenna length still remains.

What are you using for an antenna?

I leave you with this quote from K0BG who is considered to be the most knowledgeable source for HF mobile operations.

High RF voltage isn't the only concern. Since we're dealing with high reactances, auto-couplers must be mounted as close to the antenna as possible! That is to say, inches, not feet! And, you cannot use coax between the auto-coupler and the antenna, as even one foot piece of coax will reduce the efficiency by 30%! The reason? Coax has about 25 pf of capacitance per foot. The capacitance of a typical HF antenna ranges from 20 pf to about 45 pf depending on its length and frequency of operation. Since our auto-coupled antenna is essentially a base loaded vertical, placing 25 pf to ground will shunt a large portion of the RF to ground.

In simple terms, your long coax length on a non coil loaded antenna is radiating RF that should be going out the antenna but instead is being wasted as un-efficient RF coax radiation. The lower the frequency, the higher the wasted RF radiation.

Thanks for your concern. Your point and quote are valid. I do have 3 trucks set up the same. This is the only one with an amplifier though, the other two are just the radio and tunner, though those tuners are automatic and all work fine for my needs. I have had screwdriver antennas on a couple of trucks in the past and they are a bit more efficient...but the use of this truck in the country with trees and brush make the screwdriver a bit impractical. I have the icom tuner you mention, well actually my son has it now and I did not find it anymore efficient mounted the way that you have it than the ldg auto tuner mounted in the cab... that is why my son has it now...he took it out of his truck and put an ldg in the cab... but now he is going to take it out and go with a new HI Q screw driver. He does not mind the look of the 5 or 6" coil. If I am not happy with this installation long term, I can always mount the rebuilt KJ7U screwdriver I talked about earlier, that is the one I took the old screwdriver motor out of and put in a planetary gear drive motor...it will handle 600 watts... I just did not want anything that bulky in the woods.
O

fourstringburn said:
This doesn't look pretty, but this the correct way a remote tuner needs to be installed on a mobile HF.

This is the Icom AH-4 Remote tuner.

After seeing this my fears of looking like white trash mount a 108" whip on my Camry have gone away! having grown up in Germany I am trying to imagine this car and screw driver combo on the autobahn going 150mph and the looks one would get!!! LOL Imagine a Ferrari or Bugatti with that setup on the Autostrade. True devotion to the hobby! Cheers!!
Reactions: Tallman