Most antennas I have used outside of wire were sort of plug and play. When I opened the Maco box I was a little intimidated by the bag of hardware containing many screws, nuts, washers and other parts. I sat down and began reading the instructions for assembly and then started putting it together. Your first part to assemble is the hoop and attach it to the base. The nice thing about the instructions is that for each step there is a picture of the assembly and parts involved. One nice thing when checking the bag of hardware they let you know that it contains extra screws and nuts for the person that just may drop one. I've been there !:tongue: Once the hoop is assembled and attached they give the measurements for setting the matching system . After it was ready to tune I found their measurements were perfect.
From the living-room I hauled everything to the back yard to do the next step which was the vertical assembly. Each part is to be measured 6" from the end going in and marked. When you put the smaller tube in you stop at the 6" mark. When you get to the final tube it is only marked at 4". Then as you put them in place they are clamped. This part went easy and I put the rubber cap on the end.
I then did the radials. I grabbed a cinder block and placed the bottom of the base in the hole of the block and it stood up nicely as I assembled the radials to the base. Here was an interesting part. A friend of mine had assembled quite a few of these and they had trouble finding the correct place to put the spider on the base that holds the radials. They have to be just right or it messes up the matching. The guy I bought the antenna from called Tom Charles at Maco ( Son of the maker of the Gizmochy antennas) and let him know the trouble they were having locating the right spot for the radials to be under the matching system. He made the improvement right away. The antenna I bought has the leg ( brace holding the matching system to the base) of the matching system follow down the base and stop at the exact spot the spider needs to be located. You just butt up against it. 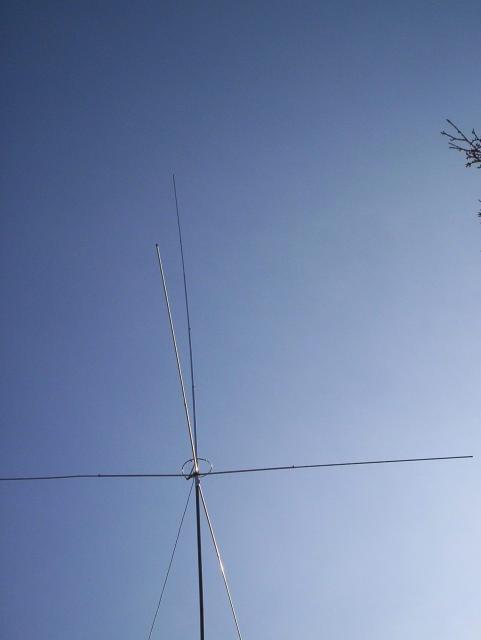 Seems like they are great for listening to the customer. The guy that I bought the antenna from stated that there had been a problem towards the end of Maco ownership of the company that the aluminum was skimped on. He said when Charles took it over they upgraded to commercial grade aluminum because of the complaints . Another step in a right direction.
After everything was assembled I mounted the antenna on 10' section of mast pipe. My wife steadied it as I went inside and checked the SWR. I should say that the instructions give the measurements for the length of the vertical according to which band you want to tune to. I wanted to tune it for 10m and made it a little less than the stated length to get close to my desired frequency . You tune by lengthening or shortening the first clamped section. They provide a hose clamp at this section to make it easy to loosen. It took me about 5 adjustments to get it almost flat where I wanted it to be. I then raised it up on the tower. The top of the antenna is at about 45-50 ft. I then check the SWR after it was raised and it stayed the same as it was at 10 ft .
The performance was outstanding. Several people that couldn't hear me before were now hearing me. I talked to a gentleman about 50-60 miles from me that I normally talk to and he stated I was giving him a reading of 8 s units barefoot where I use to give him 5-6. The man I bought the antenna from has never been able to hear me but as soon as I got on he was the first to come back to me. He couldn't believe it. It was that great of an improvement. My noise level is way down also.

The total time from beginning the assembly to being on air was around 3 hours. I was taking my time as to be sure I was doing everything correctly .

So I am very pleased with the performance of this new antenna and pleased how well the assembly went. I was given Tom Charles' phone # and was told that when you call Maco he personally usually answers the phone. I'll try to get a pic tomorrow of the antenna.

Cool, I love mine and I know you will love yours. I hade the Imax 2000 and the maco was better at recieve, transmit and the noise dropped. We might be able to make contact now. let me know when you want to try 10 meters.

I use mine on 10 and 11 meters with no problems. swr is great on both without a tuner.

Roger, Where do you have the antenna tuned for as far as resonance ?

Here's the Maco up in the air-

So where is yours tuned?

airplane1 said:
Cool, I hade the Imax 2000 and the maco was better at recieve, transmit and the noise dropped.
Click to expand...

Noticed the same thing here when I switched over.
Given the same height on the same mast - the Maco was sure hearing stations better than I Max.
H

awsome review.. dumb question though were and how did u know
where to place the wire?also i understand the marking 6inches on tubing
but isnt the bottom used for adjusting the overall lenth of antenna?
so starting at bottom of antenna do u mark the first verticle tube
since after all assembly is finshed you,ll be most likely moving it
up or down a little
O

hotrod said:
awsome review.. dumb question though were and how did u know
where to place the wire?also i understand the marking 6inches on tubing
but isnt the bottom used for adjusting the overall lenth of antenna?
so starting at bottom of antenna do u mark the first verticle tube
since after all assembly is finshed you,ll be most likely moving it
up or down a little
Click to expand...

You place the wire a certain amount of inches over...I forget how many, but it doesn't have to be exact.

I used a sharpie and marked each section.

When you adjust for SWR, you only adjust the top section.

You want to adjust the swr at the first hose clamp where the first piece of tubing comes out of the base tube not the top section. You will need a 20ft ladder if you tune that section. LOL.

lol. ok but that section at the base do u mark it at 6 inches
as you described in your first post.

Here are the instructions-

Usually if I can hear em' I can talk to em'.

Maco describes the bottom of the V58 as: below the hole for mounting bracket C13P and warns this dimension must be correct for the antenna to work properly.

Where, exactly is the bottom point of the V58 noted below in Detail 2D mast mounting?

I have never owned or installed one of the antennas, but I have always been a bit confused by how this important point is discussed but not really pointed out in the images. They make clear where the top measurement is and that is obvious, and they make an arrow pointing to where the antenna length should be adjusted, but the bottom is subject to interpretation and I bet this creates some confusion for some owners and may account for all the claims that the V58 is hard to tune.

Also, there are several instructions around that are all similar, but not identical. In one manual there is only one mounting method noted for the customer provided mast. This method shows the mast inserted into BA1P base assembly of the antenna. In another manual Maco describes mounting the antenna both inside and outside base assembly BA1P. If the bottom of this antenna is actually the very bottom of BA1P, and not below the hole for the mounting bracket C13P as noted, then how does one measure the bottom of BA1P when it is inside the supporting mast? I realize you can measure this before assembly and thus be able to account for where the bottom actually is inside the mast, but what if you don't realize this fact before hand, where do you measure the bottom of the V58.

I wonder why Maco doesn't just state, and make an arrow pointing at the bottom of BA1P or the bottom of the hole for C13P, instead of making a guessing game of this important dimension point? I can't tell from the artist renderings of the antenna in the manual, but it looks like there could be several inches difference between these too measurements and for sure enough to cause tuning problems for a new owner if he gets it wrong.