fourstringburn said:
Have you come across this mic in your field? If so, any feedback? 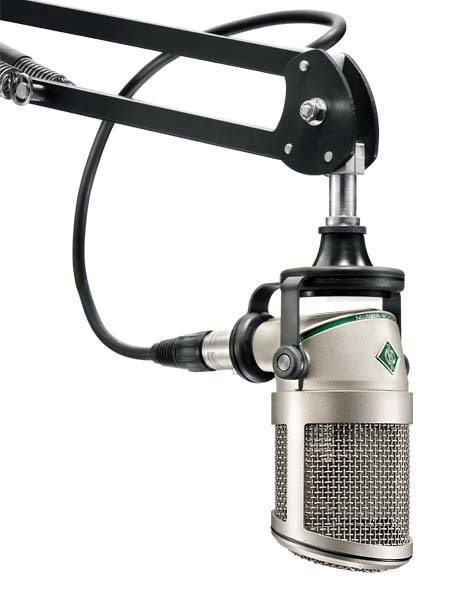 This is the Neuman BCM-705 dynamic broadcaster series mic. This is a first for Neuman since all their mics are condenser. This mic does come in a more expensive condenser series also ( BCM-104 ).
Click to expand...

No I have not personally seen nor used that mike. Neumans were a little pricey for us. LOL I have been in studios where Neumans were used. Great mics. Hard to believe they contained actual vacuum tubes in them.
O

Before I read your reply I thought the same thing "Why"? That is a lot of mixing board for HF rig! I was thinking about my time as a sound guy in college for live performances and DJ'ing weddings and parties!LOL Makes plenty of sense though when doing demo's CD's and MP3's for yourself and your friends!

A ribbon mic seems like a bit much for an HF rig!

I have a lot of experience with Neumann in General as a musician and having done a lot of sound work for a while in college and post. That and spending 12 of my first 18 years in Germany as a musician. That said almost anything Neumann makes is over kill for amateur radio use even for eSSB. The colour, clarity, flat freq. response and nuance just are not needed in amateur radio. If you do a lot of voice over work and do not want to break the bank with a Neumann 103 the BCM-705 makes more sense. The 104 is a bit more forgiving but it is intended for stage use and studio use which is why I think it is a tad more forgiving.

You will find that people that have dentures or are not used to working close to a mic so people not used to voice over work that do not have strong voice control will find it a bit unforgiving. Neuman claims you can back off of the BCM-705 and it still sounds good but I think they are lying. No amateur radio needs a $700+ mic. It is like putting racing slicks on a Toyota Camry and thinking it is really going to improve it's lateral acceleration and track time radically! If you have strident or sibilance issues with your consonants forget about this mic! The 705 has loser tolerances to make the proximity effect less and to improve low end response. How much lows do you really want if not doing voice over work for commercial purposes?

The only legitimate reason to put a Neumann anything on an HF rig is to impress people with the cost and exclusivity based on cost of the mic you have. It is about like putting a gold plated toilet seat on your toilet. If the person is blind or it is dark when they use the toilet no one will notice the difference in how well the toilet works for urinating, defecating or flushing because the gold toilet seat has nothing to do with how the toilet functions. In the case of the mic it is more mic than the rest of the radio can exploit and likely more mic than the listeners at the other end can appreciate.

The RE20 is much more forgiving and is much more a gold standard in Broadcasting. I do not think the RE20 sounds as good over all but you can stick almost anyone in front of one male, female, experienced, inexperienced and it works! It is over kill for amateur radio and pod cast's but it is a far safer bet that it can be made to work and work well in almost any situation in terms of broadcasting. It does not have a 10 year guarantee and does not come with all the freebies that the Neumann comes with though. I think most sellers let you trial them for up to 30 days. Anyone fool enough to slap one on an HF rig is not going to utter a bad word about them. People who put $3000+++ mic's on an HF radio I am sure love bragging about it I have not heard anyone that owns one and uses it on air not name drop it online and on air! Their is a saying about having more money than brains or putting a lip stick on a pig!

The EV635ND B and RE50ND B are int he $150 range and are what is used for interviewing people by most major TV stations they are hot enough for modern video camera's at 2.4mv/Pa and 2.8mv/Pa. These are not I repeat not studio mics or voice over mics they are interview mics and are dynamic with neodymium engines. EV635 is a tad flatter and the RE50 is a bit more colourful and hotter which you need with more modern camera's to keep the wind noise and background noise down the older the gear especially camera's the less that matter. It is more mic than 90% if radio's can take advantage of and with an eq or nice tube pre-amp with some compression sounds killer and they are cheap. Your better off upgrading caps, opamps and tubes in your rack gear than going crazy on expensive mic's. That said look at all the great music that has been recorded or performed live with the Shure SM58! The real snobish old school ham's still swear by dynamic mic's because you can use them with the grand kids around watching cartoons in the back ground or your mother flipping between the weather channel/CNN and C-Span and not hear it over the radio!

When talking about electret mics we know that both CB and Amateur radio operators alike running rack gear have proven that a $9-$16 ebay electret works great. We also know that $1.65 electet elements from Mouser's work great if set up right!

This all assumes it is for 2 way radio use not commercial broadcasting or recording studio! Given the nature of some hi end amateur gear sometimes you can dispense with the rack gear and still sound fantastic!!
Reactions: Shadetree Mechanic, rabbiporkchop and Mudfoot

Onelasttime said:
Before I read your reply I thought the same thing "Why"? That is a lot of mixing board for HF rig! I
Click to expand...

Yes it would be, BUT, as the thread title reads, "my little radio AND semi pro audio shack. I made this thread so people who see the pic would understand that I'm not using the audio gear on the radio its just because it seems that way because all the gear is on the same desk. This is due to lack of space and convenience.

I do not integrate my audio gear with my radio.The only exception is the ribbon mic. I own and it works great for both mediums, so why not? Ribbon mics were the radio standard for many years during the golden age of radio and are still the best IMHO. Due to their delicate nature, condenser mics are used these days but just as some recording artists and engineers still prefer analogue tape, ribbon mics are still used today.

I'm usually outspoken against using all kinds of outboard gear with radio and there is many examples in this forum of me speaking out against it. Mainly because most people who have it tend to over do it because they invested in all kinds of rack gear with all those knobs and now feel compelled or obligated to use it all.

I have a 24 track ADAT hard disk recorder and it's a good match for my 24 channel mixing board. I used this a lot when I was playing in rock bands making demos and other projects. I don't ever plan to integrate this with my HF station.
Reactions: Shadetree Mechanic and rabbiporkchop

I have used radio shack elements and even a tape recorder mic duct taped to a broken desk lamp when I was a teen.. Sounded great on the stock bandwidth radios. People asked what I was running. I'm glad I couldn't afford that Sadelta Echo Master that I really wanted back then.

Goldline or D104 on my Johnson Ranger. No processing.

PR-40 on my DM xmitter. This mike sounds great without processing on any flat xmitter.
Reactions: rabbiporkchop, Shadetree Mechanic and Mudduckmobile
J

Cool there is someone else in these forums in the industry