This is a "quick and dirty" class AB mod for the KL300p that I ran across some time ago. While this description is for the KL300p, this method of providing a small bias source can be applied to just about any class C amp. Basically any amp that grounds the bases of the transistors via an inductor is class C. In this case, the inductor is part of the input transformer.

I used a large 10W 100ohm resistor in line as well, one end of which I connected to the "Pre + Lin" side of the power switch which is on the topmost pin. When the switch is on, this pin is a source of 13.8V. This way, the bias is only supplied if the amp is on. This resistor limits the current that is supplied to the transistors, and it is connected in series with a large 3A silicon diode (1N5402), the side of which is physically touching the top of one of the SD1446s (there is thermal paste between the two) and the cathode end (stripe) is connected to ground right at the transistor on one of the emitter tabs. As you may already know a diode is simply a PN junction, and so this diode limits the bias voltage to the forward voltage drop of a silicon PN junction, generally .6-.7V depending on the junction temperature. At the connection point between the 10W resistor and the diode, I soldered one end of an RF choke (available from Radio Shack) which ensures RF cannot pass as we only want DC. The other end is connected to the brass tubes in the input transformer, on the same side as the cut that was made with the dremel. This replaces the ground connection that was there with the bias voltage. This completes the rudimentary bias supply. This small voltage applied to the bases (.6-.7V) is just right to keep the transistors turned "on" at all times, which means your amp is now class AB. Since the components used are fairly heavy-duty, the thick leads make for a nice stable structure so you don't have to worry about things moving around much.

This is a quick and dirty mod, partly due to limited room, and partly due to my feelings that simplicity is best for such an inexpensive amp.. however I see this same basic supply frequently in many 10-11m amps and even some Mirage VHF amps that are classified AB so by performing it you're getting very similar results to many major name manufacturer's amps and most other simple class AB amps.. In fact, since there is temperature tracking due to the physical arrangement of the diode and transistor you're actually a step ahead of many manufacturers.

There are much more complex bias designs out there that are meant to make sure the transistors are biased within precise parameters under all types of condition .. so if you really wanted to you could go much further with it and get even better results. This simple mod, combined with an effort to avoid overdriving the amp can help ensure that there is a reduction in the amount of distortion produced. If you think you're getting "crunchy" audio or fuzzy output then this mod might be just the thing you need.

Here's a pic of the end result: 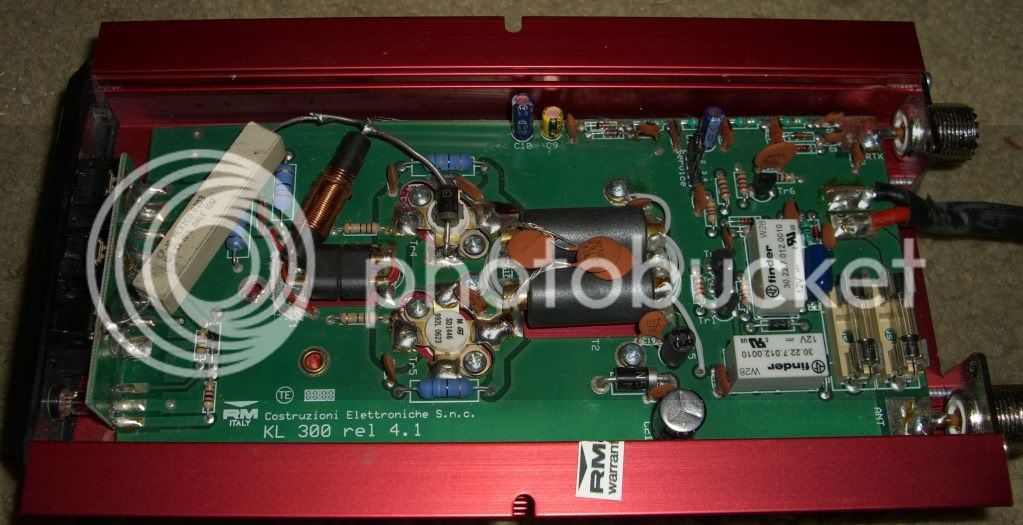 Anyway, I just thought folks here might like to have a good description and pic of this mod, since I know that many people are confused by bias and amp classes in general and how they are applied in real-world hardware.. this might help remove some of the confusion. Plus, if there are people out there with KL300p's that want cleaner SSB output and less distortion this will likely help them out too..
Last edited: Feb 22, 2011
Reactions: Robb

whenever i use a diode to track temp i like to sand a flat on the diode to improve thermal contact,
its good to see somebody out here doing some biasing

That's actually a great idea, thanks! Never occurred to me to do that..
S

I do see one problem with this basic mod that is easy to correct. The center tap on the input transformer has been isolated from DC and RF ground. That's not right. It should only be isolated from DC ground and returned to RF ground trough an appropriate RF bypass cap. Add at least one .01 uf ceramic cap between the two points cut with the Dremel. Keep the wires on the cap short to reduce inductance.
Reactions: Eric L Faulkner

Wow.. you guys are good! I'll add that to mine in the next few days and update the OP here with a better pic..
Reactions: walterjn
M

Well, it looks like I can't edit the OP anymore, so here's a new pic. Per Shockwave's observation (many thanks!) I added a .01uF ceramic cap between the input transformer and the circular ground pad around the hole just next to it. As Shockwave said, this allows the transformer to be isolated from ground as far as the DC bias voltage is concerned, while still providing a path to ground for the incoming RF signal. And as a comparison, here's the amp before modification. Sorry about the perspective, I took the before pic awhile back and it's actually a different KL300, but you can see the changes that have been made. SO, four components and a small amount of soldering later, we have a very inexpensive little class AB amp that has gotten very nice reports on the air so far. Plus if you're like me it's cool that there's a bit of your own handiwork in there.
Last edited: Feb 23, 2011
M

QuestionS Eagle, how hot does the 100 ohm 10 watt wire wound get? and have you considered adding a relay controlled from the key circuit to control the 13.8 volts to your bias circuit so the bases of the transistors is only supplied while the amp is in transmit mode?

Good questions.. I have considered it actually, but to add a relay would require a whole new case and heatsink. There's not much room in the KL300p.. The resistor gets hot to the touch, but nothing outside it's spec or even close to it. You would have to hold your finger on it for 15-20 seconds or more for it to burn you. My IR thermometer died not long ago or I'd be able to tell you exactly how hot it gets, but in testing I've left the amp powered up for days without any trouble whatsoever.

EDIT: I got to thinking, and there are some very small relays around.. it might be feasible to add one for the bias circuit, but given that the circuit can run indefinitely without issue I don't know if I will or not.
Last edited: Feb 23, 2011
S

Glad to help Eagle. As I looked at it some more I think you should add one more of those .01 caps directly across the bias diode. This is to keep RF off the diode. Because of the polarity of the diode, if RF is present across it's junction, only the positive half of the cycle will be shunted to ground through the forward biased diode. The negative cycle will remain and effectively reduce the forward bias. One more cap will prevent it and keep clean DC at the transistors base.

Mack points out another good one. That bias should definitely be switched on in TX only. It's wasting power and keeping the transistors heated between keys. The 10 watt resistor won't get hot because it's only dissipating about a watt and a half.
Reactions: 1 person
M

I hear ya about the available space and if you could fit a 20 watter in there that would drop that heat quite a bit and a relay would bring that heat down to basically nothing as the circuit would only be charged in tx but as you've said it's pretty much a no go due to space.

Thanks again Shockwave and mack! it's cool that there's some real knowledge here! I'm figuring this all out bit by bit, but so far I've honestly been pretty surprised by how straightforward much of it is. I've been having a lot of fun with it.

Regarding the relay, it does waste a small amount of power but the transistors don't get warm at all just idling, at least not that I can tell. I don't really keep the amp on when I'm not using it, so the wasted power is kept as minimal as I can keep it without adding complexity to the mod.
S

You could fit another relay in there just like the stock ones. Mounted on it's side with double sided tape. The keying transistor will probably handle the current of having a second relay coil in parallel with it. The more professional way to switch a positive voltage source is to use your friend the PNP transistor. Connect the emitter to the +12 volts from the power switch. Connect the collector to the side of the 100 ohm resistor you want to switch the 12 volts into.

The base lead should be connected through a resistor approximately 1000 ohms (or more) 1/4 watt. The other side of this resistor goes to the side of the keying relay coil that goes from 12 volts unkeyed to 0.6 volts when the amp is keyed. As long as the voltage between the base and the emitter remain close to the same positive potential, the connection between the emitter and collector appear as an open. Once the base is brought to a potential that is lower then the emitter by .6 volts or more, the transistor turns on and looks like a short between the collector and emitter.

PS: It's late and I hope I explained that right.
Reactions: Shadetree Mechanic

Very nice solution! So what you're saying if I understand correctly is that I can use the signal from one of the existing relays to trigger a PNP transistor, thereby supplying the bias voltage to the circuit? No third relay required?

Also, wouldn't the transistor need to be somewhat heavy duty, like something in a to-220 package with higher current handling capabilities?
S

Using ohms law I came up with about 120 milliamps of collector current and 84 milliwatts dissipation on the PNP transistor. That indicates even the smallest PNP from Radio Shack should work fine here. Nothing wrong with using a bigger one here. Just be sure if it's a TO220 case that you insulate the metal tab. It need not be attached to a heat sink since it won't get hot. Heat shrink tubing works good for insulating here.

This transistor will be activated by the amplifiers original keying transistor. The transistor is connected to the keying relay coil mounted on the board. This relay coil will have a diode soldered directly across it. You can feed the 1000 ohm resistor directly from the anode side (without stripe) of this diode. Check with your volt meter first to be sure this point changes from about 12 volts with the amp on but not keyed, to around 0.6 volts keyed.