The shack was beginning to look like a disaster area with everything piled on top of everything else and no room to walk around much less do any projects in there so I decided to clean it up and clean it out. I figured it was time to change the layout as well.

The Heath gear has been moved from the top shelf on the operating desk to a separate stand-alone old stereo cabinet. The HR-10 receiver is on the bottom. It is currently not working as it had some undocumented modifications done to it in the form of IF and audio filters that were removed. I need to find time to get it on the bench and do some signal tracing. When the Heath is in operation a Kenwood R-1000 is used as a receiver. Above the HR-10 is the DX-60B AM/CW transmitter and HG-10 VFO. The DX-60 microphone used is a Sennheiser MD-421 which has a built-in five position roll-off filter controlled by a ring near the connector. This greatly changes the sound quality from sharp to soft and mellow. The microphone preamp is a Radio Design Labs STM-2 active transformerless balanced to unbalanced amplifier. I also have a Urei 527-A EQ that I may use depending on the overall sound quality and frequency response from the MD-421. The oscilloscope on top is a Hitachi V212 which is an older 20 MHz unit and is used for watching modulation of the DX-60. Since I only use it on 80m and possible 40m the 'scope is fine for this. The gear is simply in the cabinet for now and not wired up yet. 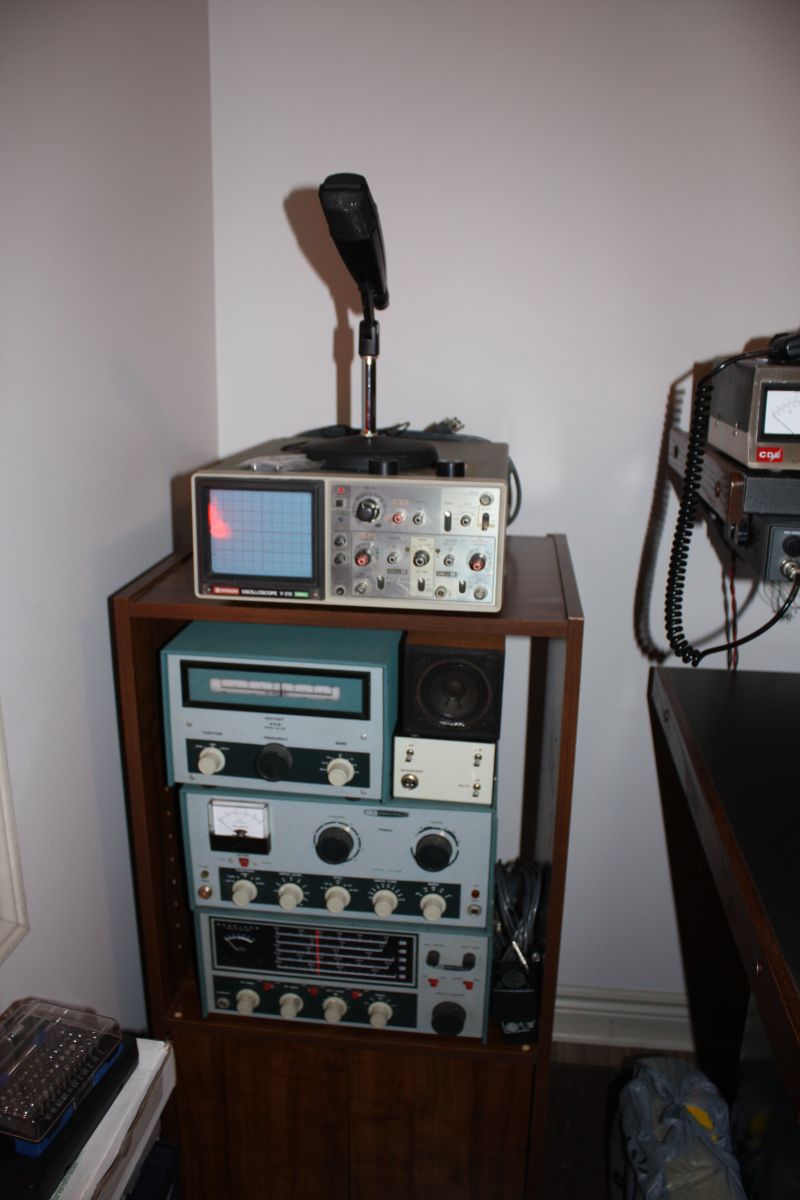 The main operating desk in the shack. Main desktop surface from L-R is: 100 watt Dielectric dummy load for testing,Kenwood SP-820 external speaker with filters. On top of the speaker is the controller for the Ameritron RCS-10 remote coaxial switch. To the right of the speaker is a Kenwood AT-230 antenna tuner with Yaesu FT-857D on top and a LDG FT-METER above. Next is the Kenwood TS-820S transceiver with two Diawa HP-801 meters on top. One is a 2Kw model and the other is a 3 Kw model.The 2Kw meter will be used with the Larcan 6m amp and the 3 Kw meter will be used with the home brew 3CX3000A7 amplifier I hope to eventually get built. To the right of the TS-820S is the VFO-820 external VFO. The microphone is an MC-50.To the right again is a VFO-520 external VFO that goes with my Kenwood TS-520 which is currently out on long term loan. The empty cabinet on the far right is from an old Heath monitor scope. It will become the control head for the Larcan 6m amplifier which will be mounted in a vertical position under the far right side of the operating desk.


On the far left again on the shelf there is a Ranger 2950DX 10/12m mobile radio that was used as a 10m IF in a 2m transverter project. It now serves to monitor for 10m FM activity. Next is an Icom IC-2000H 2m VHF FM transceiver. On top is the controller for a CDE Ham 2 rotator. Next is a Tektronix 465A 100MHz oscilloscope with a Wavetek 4101 AM/FM modulation meter. Next is an MFJ dummy load and a Ten-Tec AT-227 manual antenna tuner. Next is the Kenwood R-1000 receiver and a Radio Shack DSP unit on top. The control unit for the Yaesu G-2800DXA rotator is next followed by a Tripp-Lite PR-40 power supply which powers the FT-857 and shack accessories.On top of the PR-40 is a home made voltage and current bridge with distribution busses on the rear to feed various pieces of gear.On the far right is a Motorola 25 amp power supply that feeds the mobile radios in the shack and a spare Stabylex 7 amp power supply. Not seen is a 50 volt 60 amp blade server power supply that is to power the Larcan amplifier. It will be mounted under the desk to the underside. 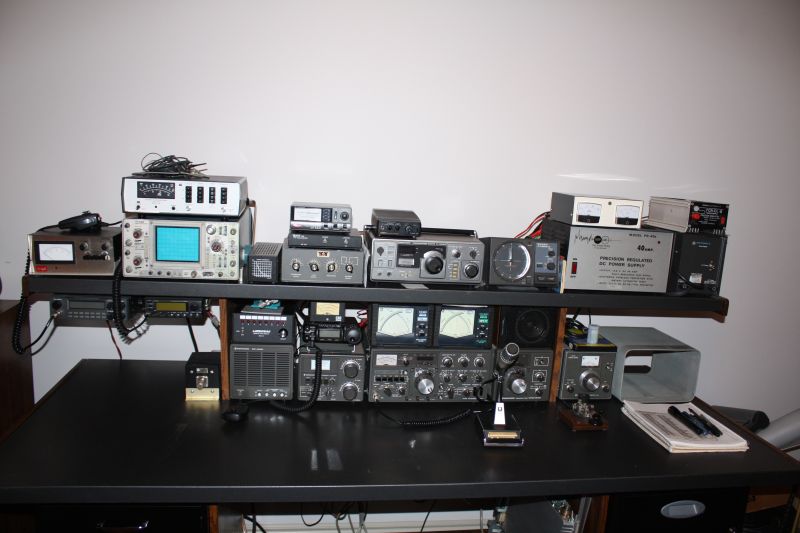 Overall view of the shack operating position. Under the kick space can be seen the Larcan amp with cooling fans installed. This will be installed under the desk on the far right of the file cabinet. 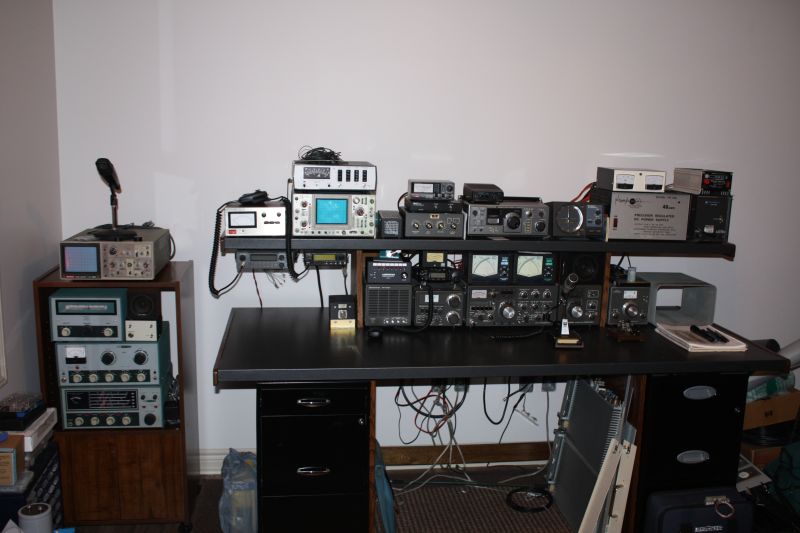 I just done a lot of remodeling in my shop/shack also. Perhaps I will start a thread on it.
Although no one responds to my threads lol.

Nice. Very nice. But the next time I see pics, I expect to see those cords cleaned up and in some type of cable tray.

Looks real nice, CK! I need to spiff things up myself... maybe you'll be my inspiration.

A well put together good looking setup Capt. I'm working on getting my shack put together how I want it. Pics to come......eventually

pro151 said:
Nice. Very nice. But the next time I see pics, I expect to see those cords cleaned up and in some type of cable tray.
Click to expand...

That's another project. I have a panel made up to fit in the wall under the desk but will wait until spring as I have to cut out a large piece of gyproc and then remove the eight electrical boxes nailed to the studs. then I have to pull out the insulation and vapour barrier and drill a couple large holes down thru the sill plate into the basement to run all the cables. The panel is a nice framed wooden panel with a metal panel insert loaded with coaxial bulkhead connectors to terminate the Belden 8214 pigtails from the LDF4 heliax coming into the basement. The connectors are the type that install on the cable ends with a bulkhead mounting flange on them. The panel also has a multi pin plug for rotator and antenna control lines. The coaxial cables will then simply be screwed into the jacks in the panel and run to the gear. That big empty wall space behind the desk is going to be filled with a large world map as soon as I can get a back and frame made for it. I already have the map. As for the existing power cables you see, I have learned from experience that they should NOT be shortened with cable ties and made all nice and neat as it is a bitch whenever you need to pull a piece of gear out. They are all just neatly bunched up loosely and out of sight behind the gear.
Reactions: 74IN and pro151

This would look prettier 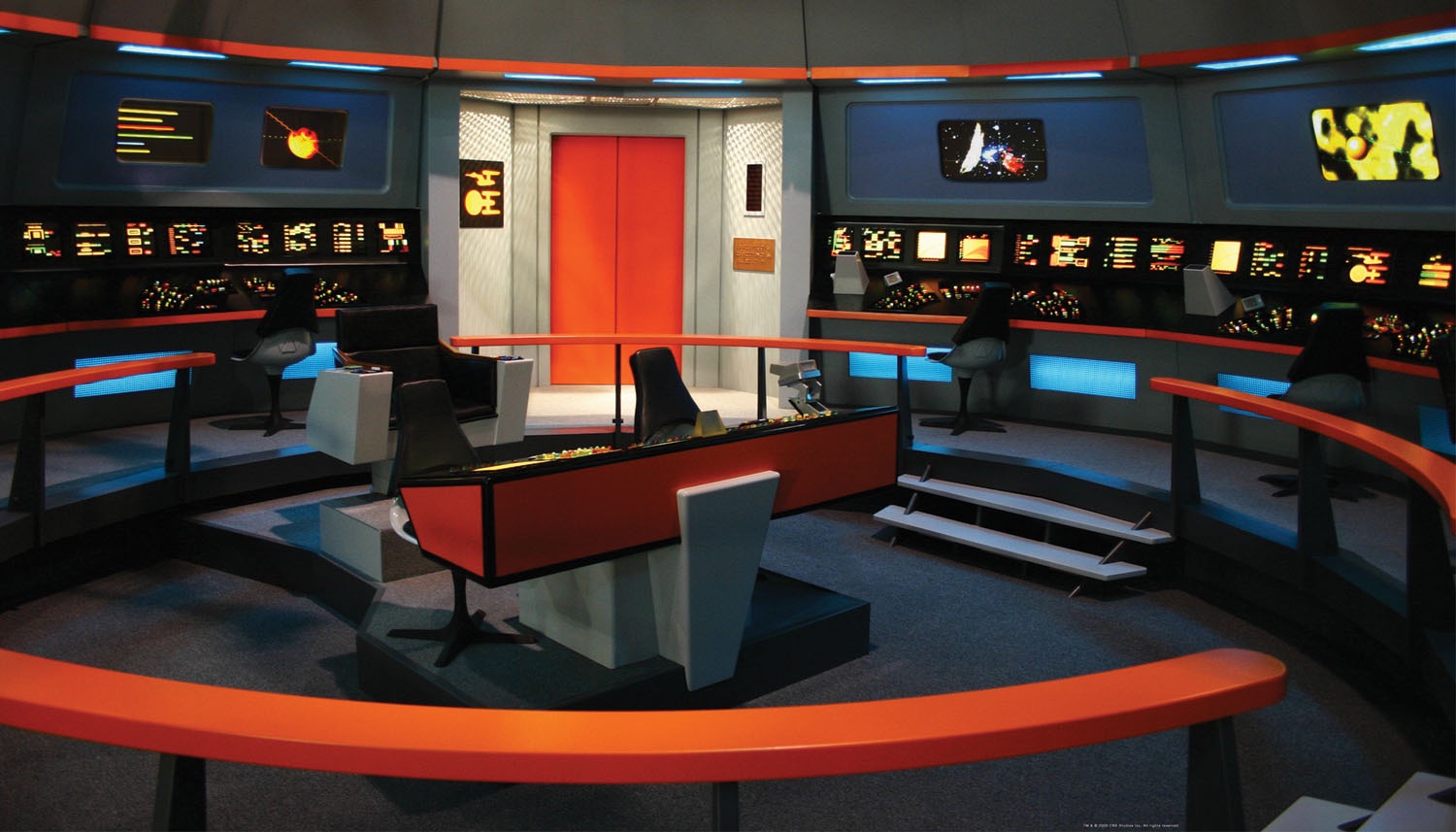 LiL'Yeshua you cannot hide posts from admins. When you make the reason for deleting it "CK might not like it" that is just an invitation for it to be shown and commented on. My comment BTW would be "Only if you are the geeky Trekkie type which I am not". Besides my shack is not that big or round.
Reactions: Lil'Yeshua

Man O man CK. Think of all the radios / amps / shiny stuff that could go into that round space if you did have that area.

Tou could also boldly talk were no man has talked before!
Reactions: binrat

Radio Tech said:
Tou could also boldly talk were no man has talked before!
Click to expand...

Uuugghhh.....don't remind me. I tried and tried to work 1A0C today from SMOM (Sovereign Military Order of Malta) on 20m but the band was going downhill too fast for me and the pile up was horrendous. In my 25+ years I have heard 1A from SMOM a total of TWICE including today. Also a T7 from The Republic of San Marino was on as well. Same results.

Man that sux. Perhaps next time. I have been out of radio comms for 2 months now. I know I missed a lot of good contacts. Due to making changes in the shop and relocating my radio room. Everything is set back up but I have yet to bring the coax into the shack. It's either too cold, rainy, or too tied up to get to it. It is in the high 40's this morning but have to make a 35 mile trip to see an old friend at a radio shop. If I get back in time and it does not rain I am going to start drilling holes!!