A friend came by and said while he was keyed up and yappin, there was a power surge (sounded like a slight delay power switch from the electric company) and suddenly the amp started smoking. Power supply did not suffer any issue nor did the radio.
Without hooking it up, I took the cover off and R5, R7 and R8 were toast. Fuse didn’t blow (30A). I replaced the 3 resistors, reconnected to power and OFF, R8 toasted immediately. I pulled one leg of D4 even though the fuse was intact, and it tested to still be a diode. Then for shits and giggles I checked the resistance between the positive and negative rail which gave a 189 ohm reading. This gentleman is on a fixed income and disabled and without saying it, there is no way he can replace it financially. He’s a true radio head and has been since the 60s and I’m trying to help him out. I’m trying not to disassemble the entire amp but if the board has to come out, I won’t be lazy about it. Both he and I would appreciate any assistance you all might have.

not sure if this will help 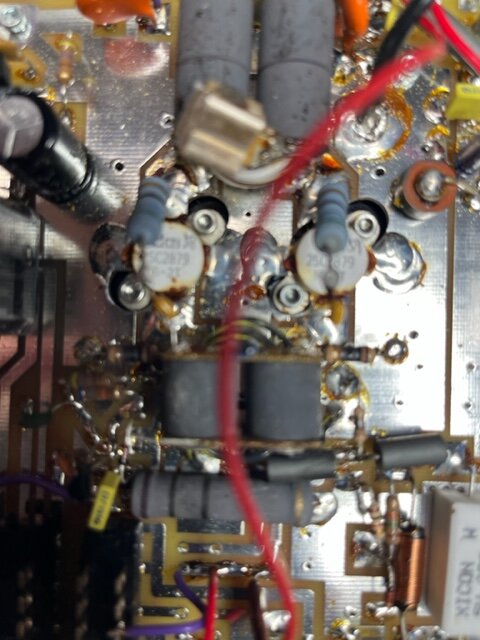 Once R8 opened, straight 12 volts went to the bases and would have blown both transistors and 10 ohms.
It seems strange that R8 smoked again when you powered it back up after replacing it. Were you using your friends power supply? If so you might want to measure the output voltage and make sure it's not putting out 24 volts.
Reactions: AudioShockwav
R

nbsr said:
not sure if this will helpView attachment 60674
Click to expand...

Wow! Someone call a Medic!

DA- I was using my ps. I asked him to check his but he has been using it with his radio for a couple of day if that is meaningful.
R

Be sure all three resistors are good and at spec.
Check the bias resistance of the input side before connecting to power.
If bias resistance is not correct, do not connect power to amplifier.,

Here is a video from the Texas Star Guru:

Manually key the amp with no RF to measure bias voltage:

Lifting JUST the base lead of each transistor so that it's isolated from the circuit board allows checking for the most-common failure.

A short from base to collector. Causes the full power-supply voltage to come out of the base terminal, feeding into what should be a 6/10 of a Volt circuit. This is a 20-to-1 overload factor for all the parts connected to the base of the transistor. Smoke and discoloration are the signs.

But if you just check each transistor for a short from base to emitter it saves a lot of wasted effort, hoping for a cheaper explanation.

There you go.
I didn't find the video, but it should help you.

There's an old Jewish saying, "Man plans, God laughs".
Nothing too serious, but I have a surprise surgery coming up this week and all the prep bullshit. Not looking for sympathy, but if someone asked me for help and I don't hear back, that's the last time I help. So just wanted to let you all know I dig the shit out of the info you gave me and will be diving in when possible.
Thank you.
Mark
Reactions: Shadetree Mechanic

Thanks for the down and dirty!
Mark
Last edited: Yesterday at 2:19 PM