Alright, replaced my mag mount Wilson 5000 with a nice 4-1/2" Breedlove puck mount and a Radioshack 102" SS whip and a roughly 4-1/2" spring. SWRs on a MFJ 259B were way off, lowest somewhere around 31-32MHz so I welded up a roughly 2-1/2" spacer that sits under the springs, for testing. (Spacer comprises of two stainless steel bolts welded head to head, with a washer welded onto the bottom bolt to spread the load on the puck.) SWRs are now lowest around low 30MHz IIRC, but still quite a ways off from 27MHz. Any suggestions? I can make a longer spacer, but this spacer is going to be ungodly long by the time I'm done, at the current rate. Right now, I'm around 1.8 flat through the 40 channels. 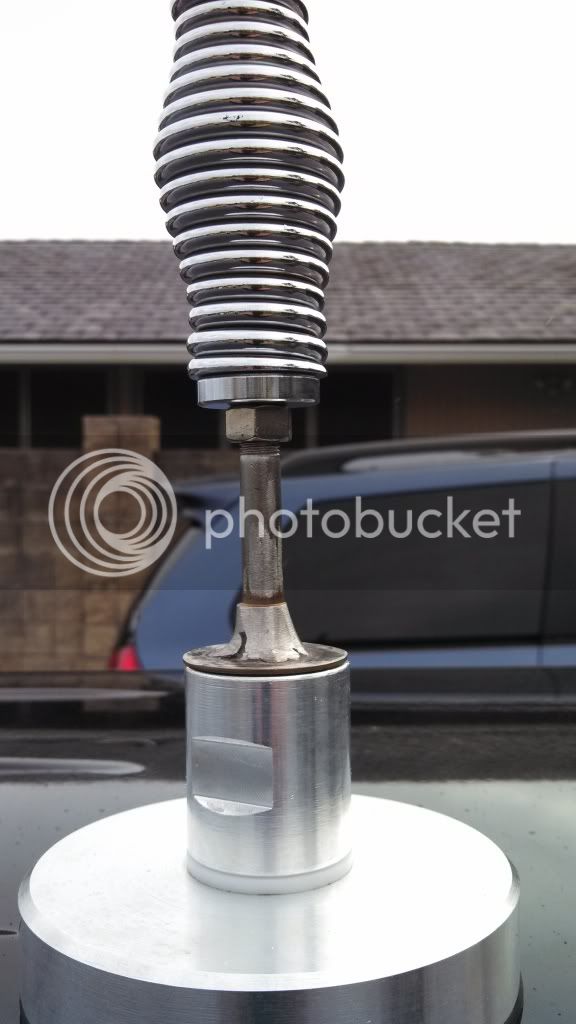 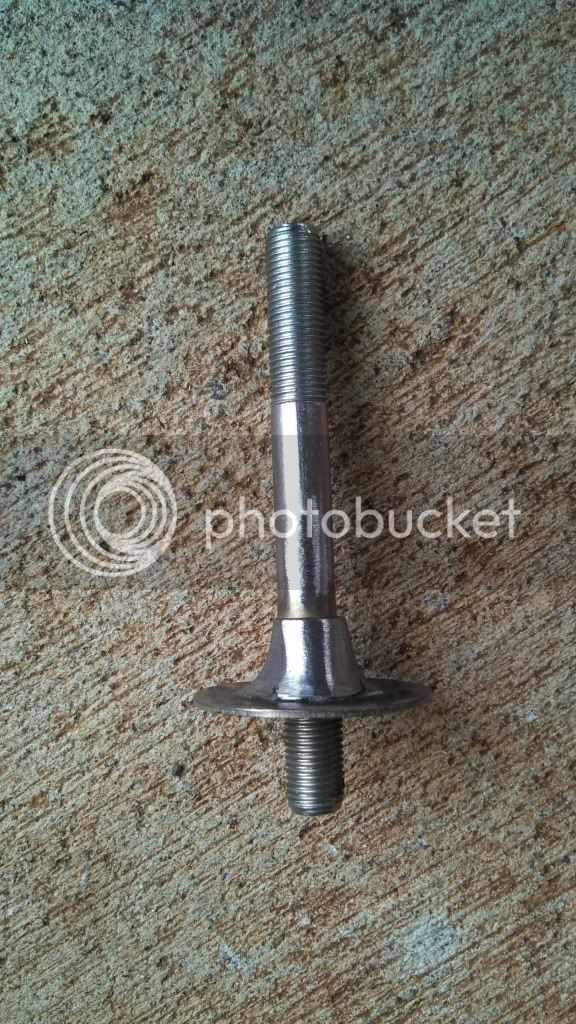 I'm considering just ditching the whip and going with a Predator 10k, which I'm sure would be easier to tune. Any suggestions as to what model? (Single coil, competition, Bad to the Bone) And what length shaft? I know you want the coil over the roofline, but seeing as this is mounted on the roof of this Scion xB, does it make a difference where the coil is?
G

Take a look at KØBG.COM website, might be some help? Mobile operation website, covers all aspects of mobile ops.
Have you bonded the auto? These straps really helped me knock out noise and seemed to help flatten the swr. Good luck!
Reactions: Groundhog KSS-2012 and SIX-SHOOTER
W

buickid said:
I'm considering just ditching the whip and going with a Predator 10k, which I'm sure would be easier to tune. Any suggestions as to what model? (Single coil, competition, Bad to the Bone) And what length shaft? I know you want the coil over the roofline, but seeing as this is mounted on the roof of this Scion xB, does it make a difference where the coil is?
Click to expand...

I bet your whip is not the problem here.

There could be any number of things causing what you are seeing, most of them are related to the mount itself. The whip is just a whip and putting another antenna in its place will likely not fix the problem, and even if it appears to make it go away it will still affect the performance from your antenna system. It is also possible the whip is to small, which would cause the resonant and low SWR points to be a higher frequency than expected.

It could be something as simple as a strand of shielding braid (or something else) making a connection where it shouldn't. I have also seen where the connection of simply bolting to the vehicle body isn't as good as you might think, and you simply have to sand off some paint on the inside of the vehicle where a ground connection is bolted on.

My point? Find the problem to make sure you fix it, or risk simply covering it up and having performance suffer because of it.

Aside from the additional length you added, what have you done to the antenna when working with this issue?

the mount seems to mounted on rubber where is it grounded?

Think I would stick with the 102" whip and sort out the problems.
Think that the results will be more pleasing to you in the short and long run/view.

Don't mess around and just break down and get the proper 6" spring. Those 4" springs will just make the antenna too floppy; the 102" whip is already floppy enough.

Make sure that you are testing the SWR in open ground far away from other vehicles, power/overhead wires, and large metal objects.

1.8:1 is not bad and will not hurt the radio so why not run with it for a bit and see how it works. You will never notice the diference between the two readings.
Reactions: SIX-SHOOTER

w9cll said:
1.8:1 is not bad and will not hurt the radio so why not run with it for a bit and see how it works. You will never notice the diference between the two readings.
Click to expand...

Robb said:
Don't mess around and just break down and get the proper 6" spring. Those 4" springs will just make the antenna too floppy; the 102" whip is already floppy enough.
Click to expand...

Personally I would recommend a riser, the antenna will move around a lot on its own as it is. That beinbg said, they do make some 4" springs that are about as stiff as a riser. You have to get the right ones though.

I agree, stick with it.


Robb said:
Make sure that you are testing the SWR in open ground far away from other vehicles and large metal objects.

Double check that the puck has a solid ground.
Click to expand...

Also remember, as far as the antenna is concerned SWR really doesn't matter. As long as you have low enough losses in your feedline almost all of the power, including most of the power reflected at the antenna, is still transmitted. The only part of your system that really cares about SWR is the radio. Using that analyzer the X rating is what the antenna cares about, and it should be X=0 near where you are transmitting.

I was going to add a comment on my own post and somehow it goofed up. (Sitting downtown Charlotte waiting on a job)99.9999% of the time I'm on my iPhone 5 and every once in a while when I try to edit my post,it only shows 'quote'. Then it starts acting right and you see the result. I didn't mean to quite someone else. You aught to see the people on FaceBook that okays my friend requests I never did solicit to. LOL!
Last edited: Jun 4, 2013
B

Hey there, thanks for the replies everyone.

The auto is not bonded. Where do you guys buy those bonding straps? The previous antenna (Wilson 5000) tuned very well without bonding IIRC. I have read K0BG's site, very informative for sure. I'll take another look.

I don't recall exactly where X was lowest, I'll have to ask my friend to borrow the 259 again, and take a look at that manual. I do recall it getting low somewhere above 28-29MHz though. X= around the CB frequencies was about 38 or so though.

We tried my friend's Penetrator antenna on the mount just to see if perhaps something was wrong with the coax or mount. It read a 1.2 SWR and something acceptable on X within the CB band, so I believe the mount is good. The coax should be fine, I insulated the critical parts with heatshrink where it goes in the mount. The inside of the vehicle roof was sanded down to bare metal, so the whole plate that clamps down on the inside should be well grounded. I haven't done much with the antenna besides add the extension, and try the MFJ without any spring at all (just whip). As expected, X and SWR were lowest WAY above 11m.

I really would like to run the whip, but tuning this is a challenge because of the lack of tuning mechanism. I couldn't find any 6" springs for sale online, mostly just the typical 4" ones like I already have, and some 3-1/2" shorter ones. 6" springs are rather elusive. If you know anyone that carries them, please point me toward them, as that would be a much better solution (aesthetically) than my spacer.

I'm running the radio barefoot into the antenna, works pretty well so far, but I'm worried about running power (TS DX500) into it with such an SWR. I know low SWR's are important, the more power you run.

The strange thing is, the antenna already has a riser. If you look at my first picture, the base of the mount has the puck, then an insulator, then the riser that the 3/8 stud screws into, which is probably about 2 to 2-1/2 long. Between the spring, my extension, and the riser, its definitely equivalent to a 6" spring or more, and I'm still resonant far above 11m. The feedline should be good, its LMR-400UF. My jumper is LMR-240UF. Will the Texas Star care about SWRs? I'm sure it can't be healthy for the transistors. I will try to retune to get X lowest in 11m.