A journey of 41steps begins with six diodes.

They say a journey of a thousand miles begins with one step.

This board gets built in several steps. Parts count is 41 soldered-in components.

For those who missed it, we built and sell this circuit board to replace and upgrade the Pride DX300 base amplifier built in 1977 and '78. The FCC tightened the rule in 1979 for what is (and isn't) a legal ham amplifier to sell in the USA. The DX300 flunked the new specs and production ended forever.

Starting point for assembly is these six 1N4002 rectifier diodes. 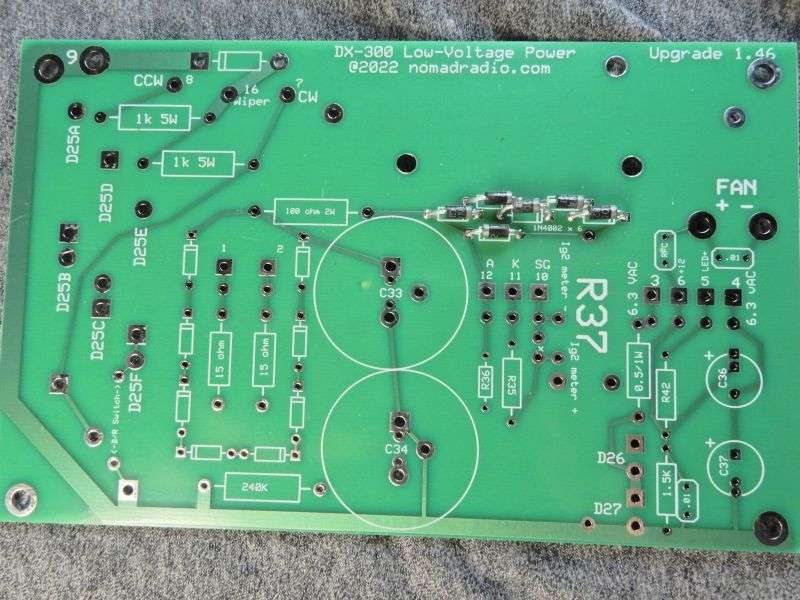 If this board were being wave-soldered, all the parts would get inserted before soldering the entire board at once.

We don't have one of those machines. Every part gets hand soldered in the Pride power supply boards we sell. It's easier to navigate the dense forest of lead wires sticking out the solder side a half-dozen or dozen parts at a time.

The next step after the six diodes above is the rectifier for screen and grid bias voltages. 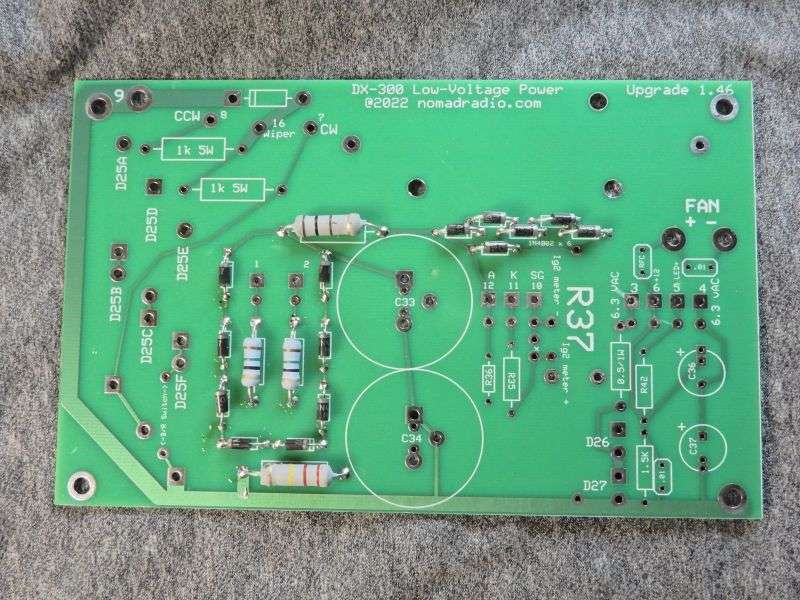 About those six diodes. You won't find them anywhere on the diagram for the factory's version of this board. 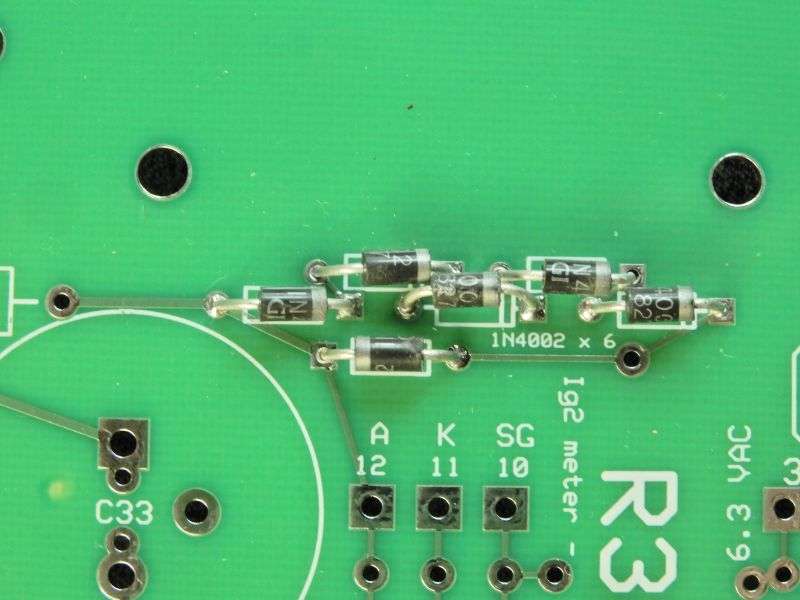 Sounds wasteful, but they serve one purpose only. They are in parallel with the "Screen" LED on the front panel. That LED tends to die young, the first time any kind of surge occurs in the tube. A 3-Volt LED in a 340-Volt circuit is just vulnerable. Five of the diodes are in series. This limits the voltage drop across them to around 3 Volts. Takes only a bit less than that to light up a red LED. LEDs don't like reverse-polarity voltages applied to them. And a sixth diode with its polarity reversed to the first five holds any reverse voltage below 1 Volt.

So-called "reverse screen current" is a real thing, so adding that one more diode seems worth while.

Six parts just to protect one little LED? Got aggravated by that indicator always being dead on the amplifiers we repair. I got a deal on a reel of 5000 of that diode a few years back. Six diodes probably cost me about as much as the LED, maybe less. Definitely cheaper than the labor to replace a blown red LED.

I'll update as this batch continues to be built.

So here's the next step of the process this time around. To maintain compatibility with the factory-built low-voltage board we have a row of nine pins. They engage spring contacts that slide over them, so you can remove the board without having to use a soldering iron. 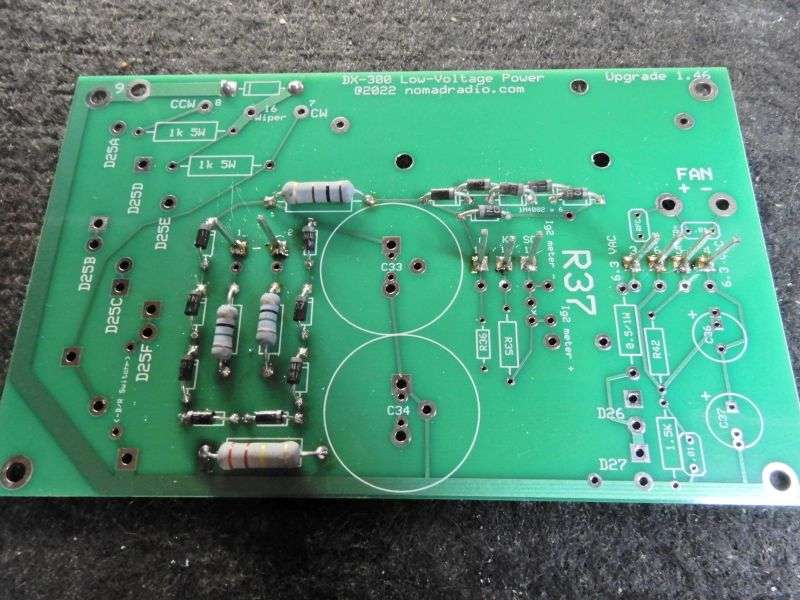 I made the holes where they mount a little too large, so they don't stand up perfectly straight. These pins are a bit larger than those used on the factory board. Seems to provide a tighter fit, less likely to just fall off. 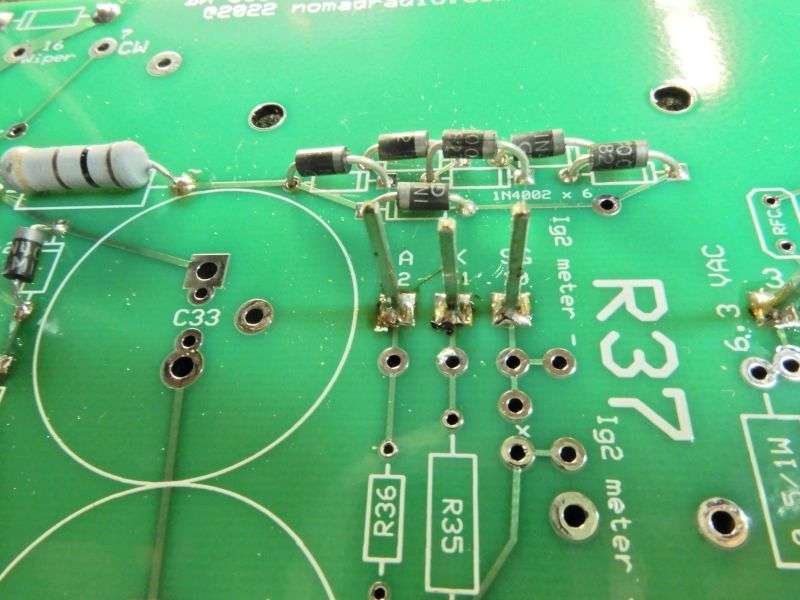 Might seem silly to devote one whole step of this process to those nine pins. Fifty board with nine pins each is still a lot of steps. More than enough to justify making them one separate step of the assembly sequence.

Once all 450 pins are in place, we'll move along to the next handful of parts.

The molasses creeps ever onwards.

See if you can spot what's different between the top board and the one on the bottom. 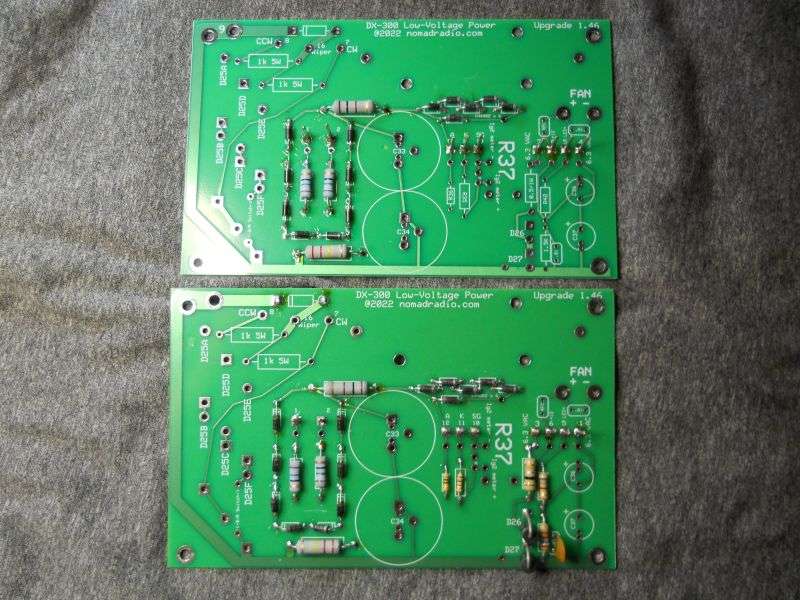 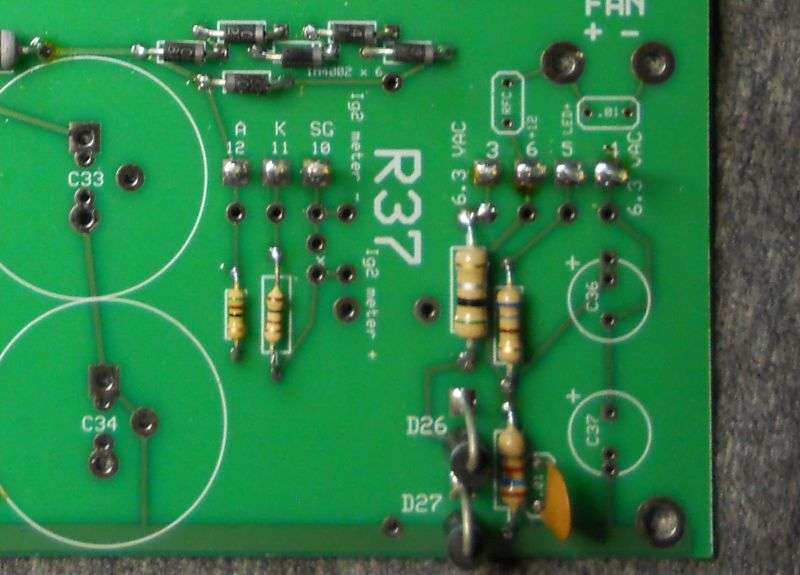 Yeah, it's only eight parts. Does make the 'forest' of wire leads sticking out under the board easier to navigate with the iron tip. Can be awkward when they get too densely placed.

But it's not eight parts. It's four hundred. Plenty enough to constitute one more step of the process.

Gettin' there. Only a dozen of them completed to this stage so far. But we're down to the 50-Watt resistor and ground lug. 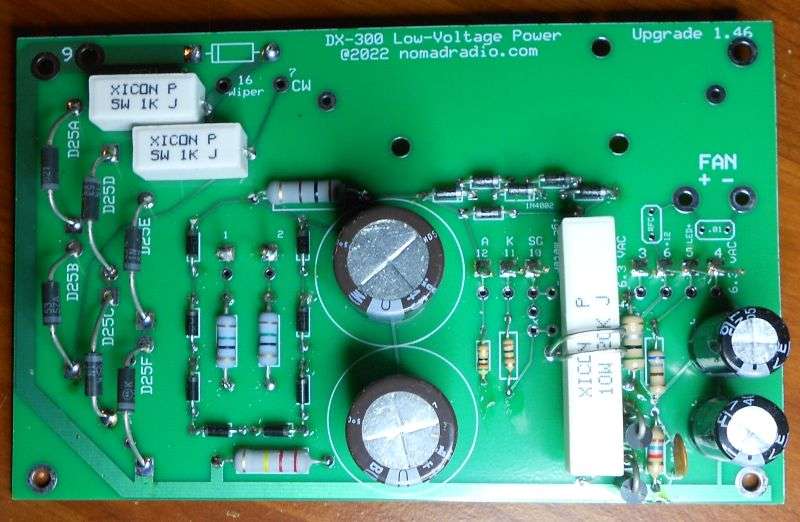 Oh, and a bias control.

Are we there yet? 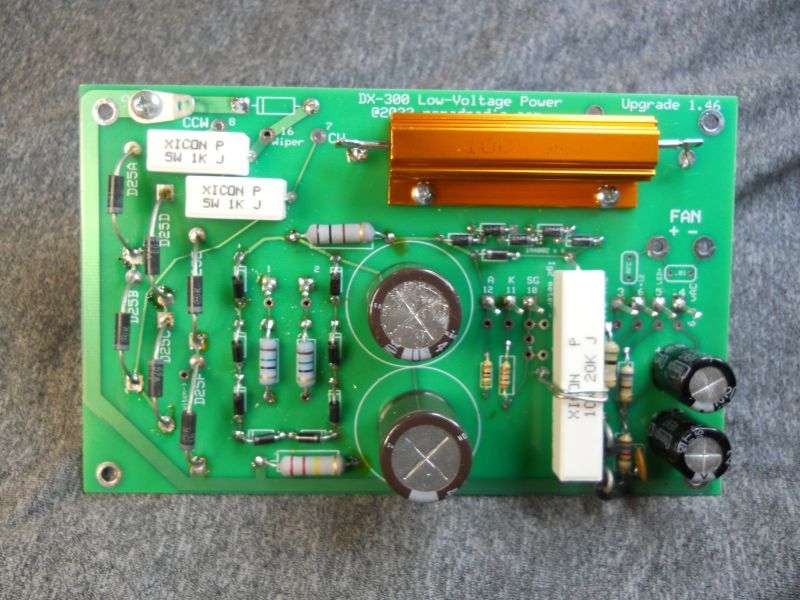 Almost. Did a terrible job managing parts for this batch of boards. Only had enough of some parts for all 50 boards, not so much for others. Now all we need for this board is the bias control. The factory used a 2-Watt control. We use one rated at five Watts. That control is a chronic failure in the factory setup. With any luck they'll arrive from Mouser in the next day or so.

Out of the hundreds of this board we have sold over the years, nobody has complained of a failed bias pot yet. 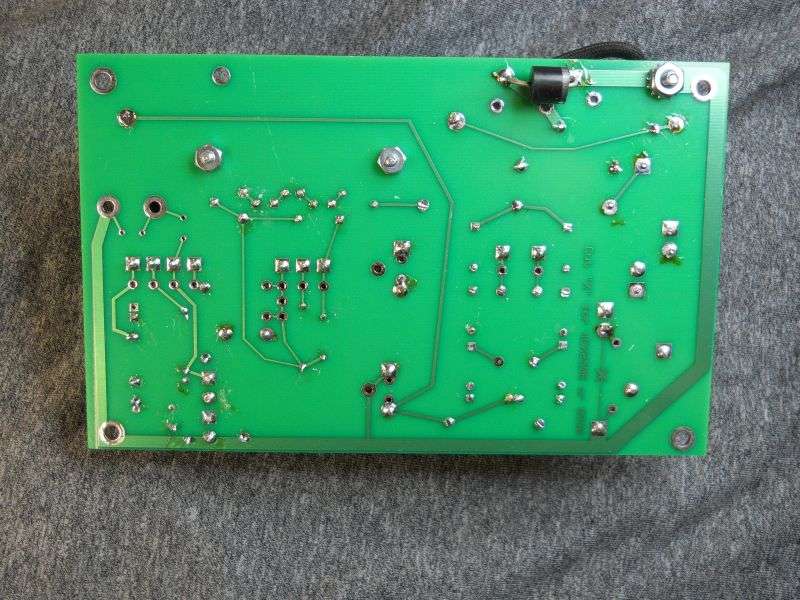 So far. The fat black diode at the upper left on the solder side of this board is a reverse-polarity crowbar wired from the bias control to ground. Much like the one seen soldered to the inside of the power jack on a Galaxy mobile radio. When a tube is overheated, it can arc over inside. This puts a pulse of positive voltage onto the input circuit and its negative-polarity bias source. The other parts in the bias section are built to tolerate a short to ground. Worst case if a tube goes "SNAP!" is for this diode to fail as a short, like the reverse-protection diode in a mobile radio.

Does serve to protect that control.