You never know what you're going to get.

First boo-boo on this job was mine. We install a circuit breaker on the rear panel to protect the small transformer. The Pride's 10-Amp fuse will keep it from burning down your house. But an overload on the small transformer that powers the grid-bias, filament and relays will cook it before that fuse can trip. This is bad juju, since nobody sells a direct replacement for it. Have to drill a 3/8-inch hole just above the fuse holder to mount it. 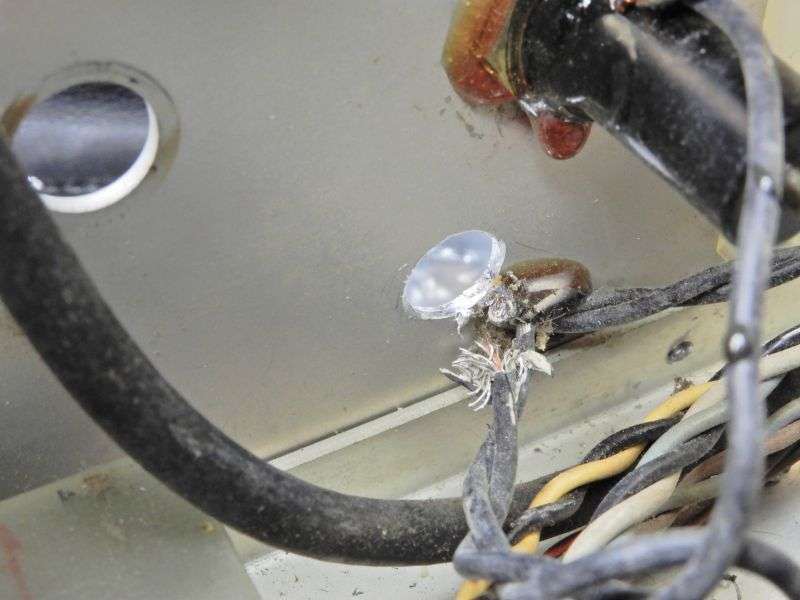 Just one problem The twisted pair of black wires that got damaged here were glued to the inside of the rear panel. And in just the wrong spot. Shoulda looked first. I'll admit this is a first. Been servicing this model for 44 years or so. First time I've seen this. Only a nuisance, though. Got the wires spliced and on to the next problem.

It wasn't obvious at a glance, but somebody had installed the wrong tube socket. Seems to me in all these decades I have seen exactly one of these sockets actually go bad in this model. Somebody thought this one was, and replaced it. 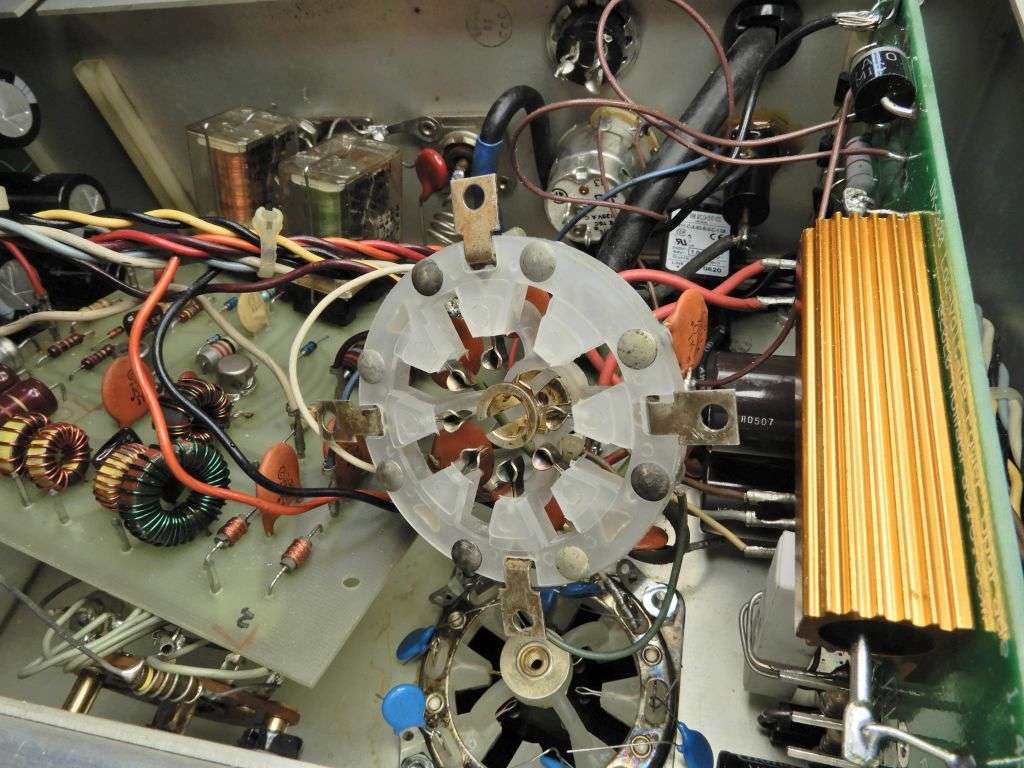 The one reason I question the guy's judgment is the socket he chose as a substitute. The socket at the bottom of the pic is the new one. Same as the factory socket. Has a metal ring all the way around it with a mounting ear on each of four corners. The socket in the foreground is wrong. Pins 2, 4, 6 and 8 are connected to the tube's cathode. The reason for using four pins in parallel is to reduce the inductance of the tube's circuit path to ground. I'll skip putting people to sleep with why that matters, but in this case it creates a problem. The tube never shuts off. It's always "keyed" no matter what the main relay is doing. 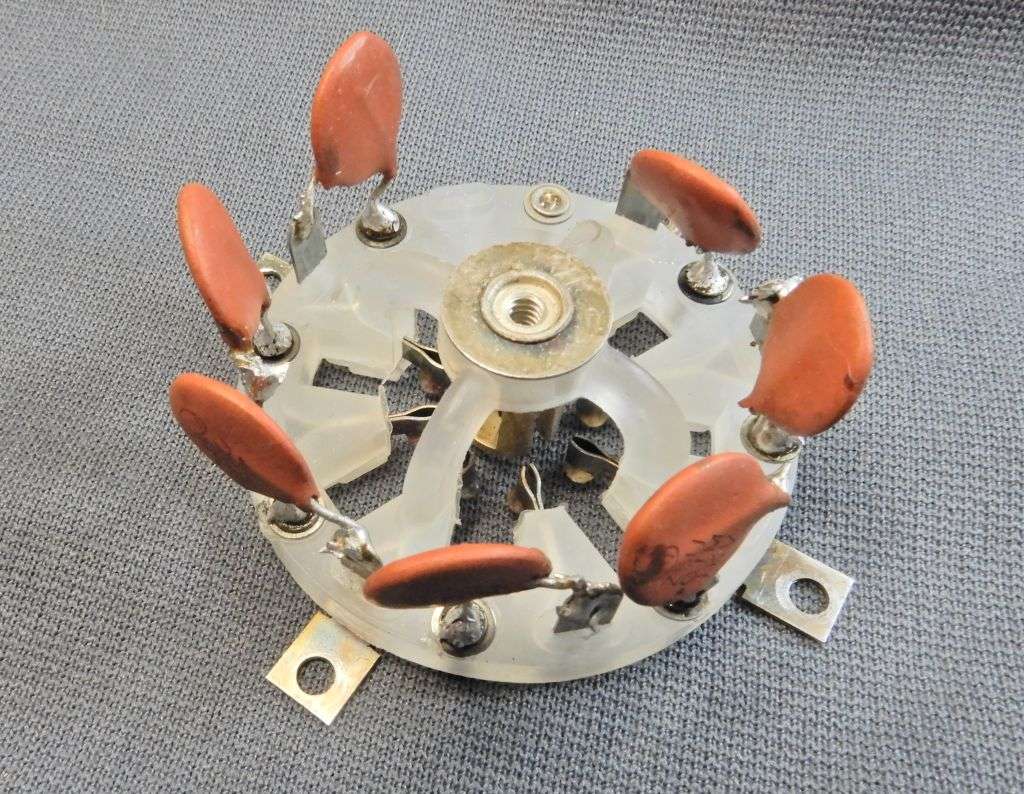 The reason is this socket. The correct socket for the Pride has all the tube's pin lugs insulated, not connected to anything but the pin of the tube plugged into it. This socket is different. The four flat mounting eyes are connected directly to the four cathode pins, 2,4,6 and 8. Mind you that for an amplifier running at 150 or 420 MHz this is a clever way to shorten that path from the tube's cathode to ground.

But the Pride runs at 30 MHz and under. The tube's cathode is what we switch on and off, grounding it when the relay closes. Opening the circuit path from the tube's cathode to ground shuts it off.

But not with this socket. Just when you think you've seen everything. I was fortunate to have one socket of the correct type on hand, installed it and sent the customer home with a working amplifier. But we bought that socket in 2003 or so. Yep, that one just doesn't go bad very often.

So here is the clue I missed. Customer says it's stuck on High, won't go to Low side. The High/Low switch makes no difference. I just assumed they got it backwards. The more-common fault is a Pride stuck on Low side. High side is selected by shorting across a resistor in the tube's ground (cathode) circuit. When the connection to the High/Low switch goes bad, you get Low side all the time. A common fault, really. I just assumed he got it backwards.

But stuck on High side? Never saw that. Not until this specimen. Like The Who, I won't get fooled again. Not by this symptom. But the guy was right, it WAS stuck on high side. As a bonus, the tube was never really on standby. It was powered and pulling current the whole time the power was on and the fan running, whether you keyed it or not.

Just when you think you've seen everything. 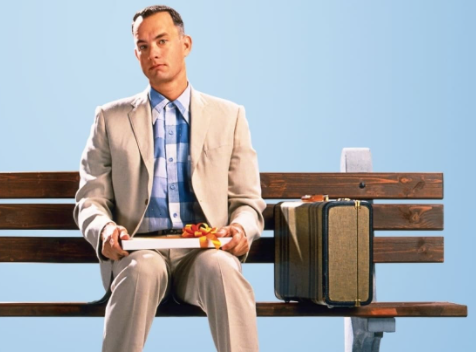 Be sure to store them in a cool dry place - they melt pretty fast in the heat...
Reactions: NZ8N

I love these posts by nomad. For amp guys it's like a home improvement tv show, very much like "this old house" or "Holmes on homes".