I've had the Elecraft K4D for a week so it's time to report on first impressions. 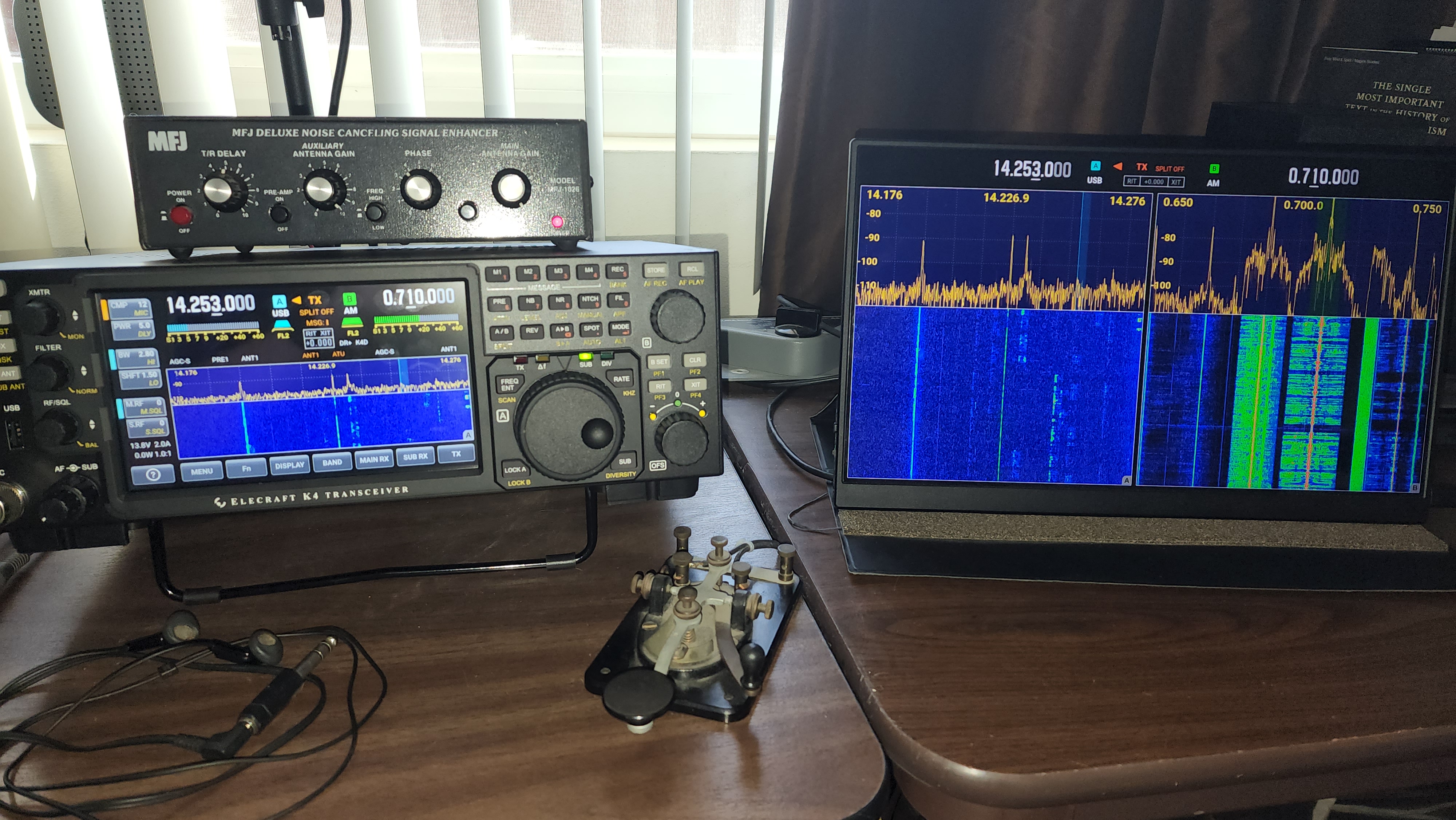 First, the display and user interface is stunning. The interaction with the rig is a very thoughtful blend of touch screen and traditional buttons and knobs. The HDMI interface allows you to run an external display with several configurations controlling how it is used. In the picture above, I'm showing the Panadapter for both VFO A and B in a split screen, while displaying only a wider VFO A panadapter on the rig. I will post more pics with other configurations in the coming weeks as I have a new LCD on order which I will dedicate to the rig.

I purchased an Icom 7300 when they first came out, curious about how well the touch screen panadapter would work. Having used both, I can say without a doubt that the Elecraft implementation is superior in every way possible. First, the most important thing is the way signals just really pop on the screen on the K4 using even just the default display settings. For lack of a better explanation, I always felt that the Icom 7300 panadapter was "muddy" compared to PC based implementations. Not so with the K4. The span can be adjusted all the way out to 368 Khz or as tight as 5Khz. The "AUTO" reference level just works and I haven't found a reason to turn AUTO off yet. The waterfall has a NB setting that you can set to AUTO or adjust as desired. Lastly, the touch screen is intelligent enough to usually "snap to" the waterfall station you're trying to listen to. It really works well.

There are a couple of extra features that are pretty useful. For example, you can freeze the screen, which is helpful if you want to take a screen shot, like this: 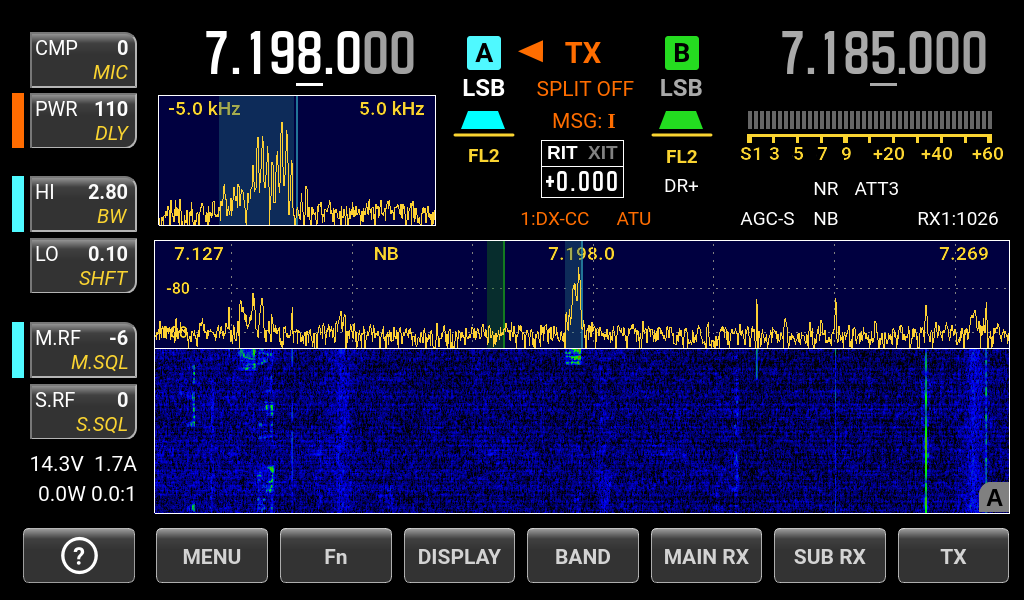 That's right, there is a screen capture feature that will write to the USB device you've inserted into the front port. If you touch the top left part of the screen where the S Meter exists, it will change to a "Mini Pan", zoomed in on the frequency you're monitoring (shown above).

I could write a small book about the UX, but I'll save some of that detail for later. After getting over my initial fascination with the display, it was time to dial around and listen for a while. Without changing any parameter related to AGC (which you can tailor significantly), I tuned to 40m SSB, turned on the Attenuator to kill some of the ambient noise (attenuator range is from 3db to 21db in 3db increments) adjusted the RF Gain slightly and dialed around to listen to various stations and was absolutely impressed by the way even weak stations popped out. This thing is a joy to listen to.

While listening to a net on 40m, there is the typical range of very strong, very weak, and every signal strength in between. The K4 has a feature called "RX Dynamic Range Optimization" which is normally turned on. Here's the excerpt from the manual that describes this feature:

"The RX Dyn. Range Optimization menu entry can be used to customize behavior of the K4's analog-to-digital converters (ADCs). In general it should be left at the default setting of ON, which configures the ADCs for best response to very strong signals. The OFF setting will slightly improve preamp-off sensitivity."

All I know is that it works and it's amazing. As soon as I heard how well the K4 handled both the strong and weak stations, I knew that it was this feature that was making it's presence known.

The K4 includes the expected TX & RX 8 band EQ settings, a simple Macro language that you can use to assign to buttons or external software, and every "standard" feature that you would expect in a rig of this class. You can plug in a mouse and keyboard into any of the USB ports to use with the UX. The front USB port will power a wireless USB mouse / keyboard. I tested it with an Microsoft ergonomic mouse / keyboard and had no problem operating the rig as if I was running a PC. I will have more detail on mouse interaction in another post, but suffice it to say that the rig makes good use of the left and right buttons, as well as the wheel.

One function that I never got to work very well with my K3 was the CW decode. It worked sometimes, but I gave up on it after a while. With the K4, I just dialed up a station, set the RX filter to 400 (or less) Hz, turned on the text decode, and all of the sudden I was reading CW without any special adjustments. Couple that with a keyboard and even the most inept CW operators (like me) can have fun in this mode. And again, the RX in CW mode is just a joy.

Since I opted for the K4D, I also have the ability to run Diversity RX, meaning I can use two different RX antennas at the same time (one in each ear/speaker), helping me copy on the antenna that is receiving the best for a given circumstance. I've never had this capability before and having fun playing with it. For now, my RX antenna is a low 80m (roughly) loop feed with a DX Engineering DXE-BFS-1 into the MFJ-1026. This setup is neat because I can also adjust the gain of the RX loop. I originally set this up to help null neighboring interference and not as a true receive antenna, so I've ordered another active receive antenna (there are a bunch of antenna ports) to this will give me even more diversity RX options.

I have found a few quirks with the new radio. Some of these "quirks" can be attributed to my own learning curve and some are actual bugs. But reporting the issues discovered to Elecraft has resulted in superb response - in some cases the issue was already known with a fix being beta tested and in other cases I reported something new that was put into the next build. If you're considering purchasing one of these rigs (or have already done so), I highly recommend joining the Elecraft K4 list on groups.io where Elecraft principals hang out, along with much of the support staff. They also listen to feature suggestions, which is pretty cool.

There are new features coming in the next build that I can't wait to try out. I will be writing more about this rig, as well as posting youtube videos. In the mean time, if there is something you're curious about, ask away and I'll try to answer the best I can. I'm having a lot of fun with this new rig.
Reactions: BenMara, 144inBama and Riverman 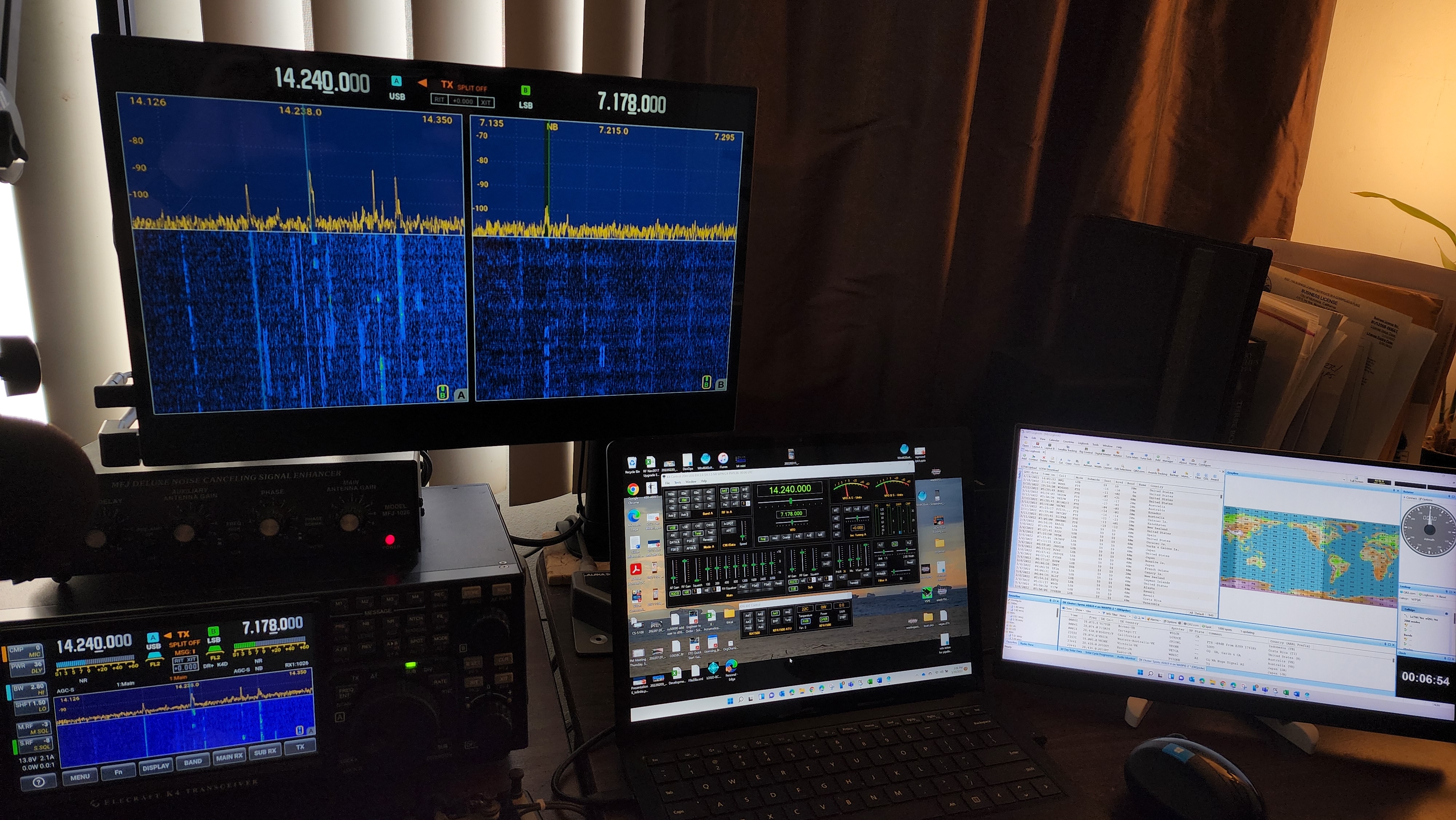 If you choose to use the external display only as a panadapter, you can configure it to show VFO A or B, or both. In the picture above, I'm using it to display 20 and 40 meters while the rig is just showing 20 meters on its panadapter.

I plugged in the wireless fob for my Microsoft ergonomic keyboard & mouse, which immediately activates the mouse for the screen control. The screen I ordered supports touch, but since the mouse control can leverage both right/left click and wheel support, you get a lot more functionality doing it that way than with the touch screen. Left click sets the frequency for the VFO A, right click for VFO B and the wheel scrolls the frequency up and down. You can click around on almost everything on either screen to pop up menus to make adjustments. Want to change the filter? Just click on it. Want to change TX from VFO A to VFO B? just click on the the TX indicator at the top. You get the idea...

In this setup, I use a mouse to control the rig and use the touchpad on the laptop for logging. If you look closely, you can see that I'm running Win4K4Suite with it also monitoring the Elecraft KPA1500 with Ham Radio Deluxe Logbook. This is a really slick setup but I found one bug - Win4K4Suite always sends the VFO frequency to HRDLogbook even if I'm TX'ing on VFO B. I'll report this bug.

Over the weeekend I installed the just-released r29 update, which included many new features (and fixes) including CESSB compression. All I can say about is WOW! Elecraft says that they see as much as 8db average gain with this new compression algorithm which is also very clean. As a test, gradually increased compression while monitoring and watching the watt meter. For me, the sweet spot that I was comfortable with was 20 (out of 30) and I could really see the difference on the meter. In the previous releases, they accidentally cut off the low and high end of the audio spectrum (around 100 and 3200 hz, respectively) but they fixed that with r29. I ran tests on air and got nothing but love about both how well my audio sounded, as well as good comments from those watching on scopes or panadapters.

This rig is a powerhouse on SSB.
Reactions: BenMara

The K4 has a dedicated USB port for a PC interface, which you use for both sound card and USB/Serial interfaces. This works as expected, but you do need to configure the input/output levels on the rig using the appropriate menus There is also a standard RS232 port which you can use independently or in conjunction with the USB interface. Lastly, there is an ethernet port which you can address from a PC using port 9200 from either telnet or most applications. I've converted most of my house to wireless only, so I purchased an IOGear ethernet WIFI adapter off Amazon, which works really well.

Having 3 different ports makes it really easy to connect multiple applications to the rig at the same time without having to use some type of serial splitter. For example, I'm using Win4K4Suite to connect to the K4 over ethernet while JTDX is connecting through the USB port at the same time. And since I can operate both VFOs, I can monitor both voice and data frequencies at the same time and log contacts to HRDLogbook using either application. To switch TX VFO requires a few taps on the screen if using different modes, but it is completely doable. This scenario is an area that needs improvement. For example, if I'm using DATA mode on VFO A for FT8 and LSB on VFO B, if I decide I want to make a contact on the VFO B frequency, you cannot just tap the TX toggle to switch TX to VFO B: you get an error message related to cross mode split. A different method to accomplish this is to tap the B>A button to copy VFO B settings to VFO A. This works except that it doesn't copy the mode at present and in this example leaves VFO A in DATA mode. Not a big deal, but I will request an improvement to also copy the mode.

Macro Language
The K4 has a fairly extensive macro language that you can use to execute a sequence of menu commands. Elecraft does a good job publishing the documentation for the macro commands which you can publish to programmable buttons on the rig or use via telnet or external software. This simple macro scripting language can allow you to (for example) automate the steps described earlier for switching VFOs and modes when using both VFOs in a multi-mode split operation. It's really pretty cool.
Reactions: BenMara