Hello,
I got a 24 pill here from a friend. He gave me the error description high SWR (1:3.5)
The ICOM7300 is not able to improve the SWR with the ATU.
I measured the TX input with a RIG Expert and tested various components. Unfortunately, the best SWR was 1:2.4. I bought an LC meter and noticed a few small deviations in the capacitors (less than 10%).
But I can't get any further. It would be nice if someone had an overall schematic for the 24 pill. And of course tips on how to proceed when troubleshooting.
There are no destroyed resistors and the transistors all seem to work.

The way you're writing that it looks like you are talking about the input tune of the 24 Pill Linear. Show me the Linears! Sorry, I yell that as I walk into Hamfests.

If you mean a 1.35 and or 1.24 to 1, input match, input tune, SWR seen by the driving radio and not the output match (Antenna SWR) that is a surprisingly good input match for a device like that.

But you mention the auto tuner isn't able to deal with the input SWR and get it flat.

I can tell you the input tune on an amplifier of that nature is going to change with drive levels, (Modulation) Being an Xforce and a 24 pill I'm going to assume it's "Class C" or the input transformers to each 2879 section is directly grounded.

This means it has no chance in hell of operating in a linear condition, again lending itself to input impedance swings.

An antenna isn't going to present a wildly fluctuating impedamnce/load to a radio just due to power output swings unless it is faulty itself or you have high levels of harmonic output that will not be in resonance with the antenna and thus, higher swr.

Can you post pictures of this beast for us?

And did these two toys play well together previously?

Have you tried driving the amplifier with no auto tuner engaged? They are known for taking a dump themselves.

Take a simple watt meter, capable of a few hundred watts and hook it up backwards between the radio and amplifier. Any "Power Number" you see, will be the true amount of power being reflected. Again, with the tuner out of the equation.

Just what does the input impedance-matching circuit look like in this amplifier? The brand "X-Force" is like "Ford". They changed from year to year. There is no single schematic that would cover every version.

For that matter, no schematics for X-Force products at all.

I'm used to seeing at least one coil and two capacitors on the input of an amplifier this size. All other things being equal, I would look for an input-mismatch problem where the input impedance match is being made in the first place.

Hello,
Thank you for your answers.
In the meantime I made further measurements on the 24 pill.
First, I measured the TX connection with a RIG-Expet and it showed exactly what the Icom 7300 had already indicated.
I then unsoldered the coax cable on the relay and soldered a 50 ohm resistor directly there. The SWR was good.
So the relay can be ruled out.
First, here is the photo of the 24 pill and the Foto of the RiG on the TX- input 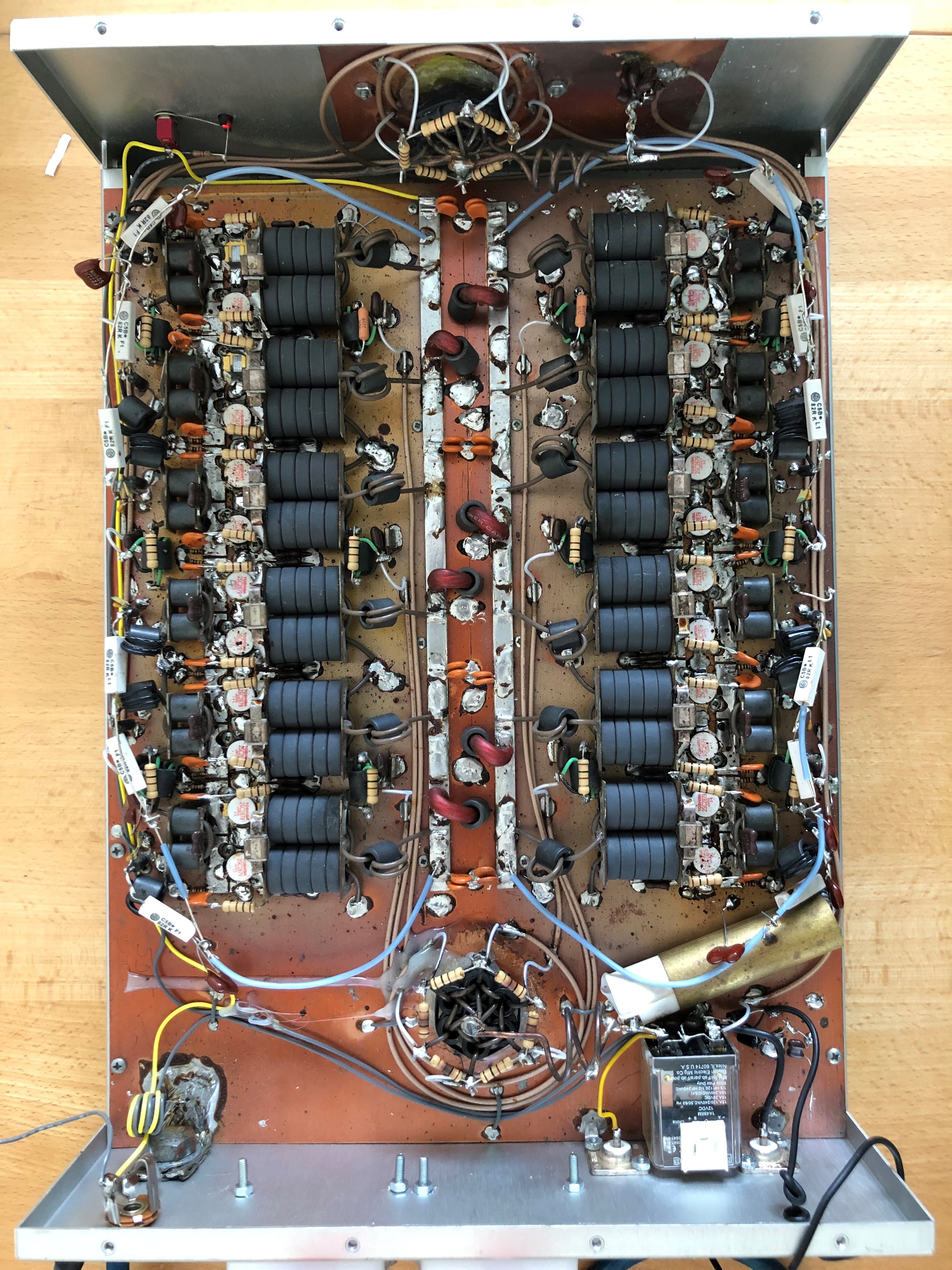 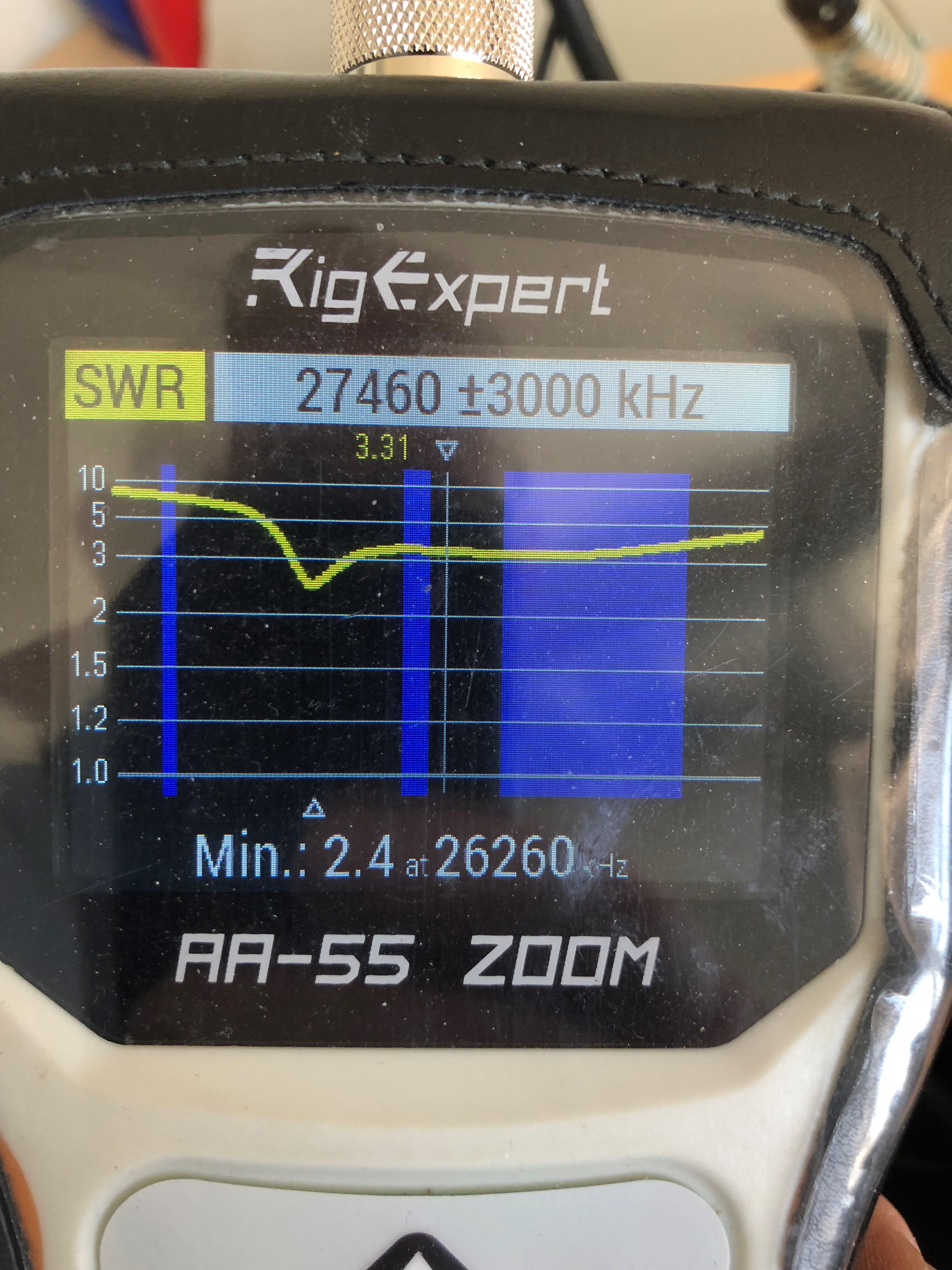 I did another try on reducing some circuit parts and desoldered 1- 2 stages behind the input splitter. As a result the input SWR goes into the right direction.
But i did not find the reason for the changing to worse.
To let away the stages is not the solution ;-)

I'm not sure that you can use a RigExpert to check amp input SWR like that. The RigExpert only outputs a milliwatt (if that) and won't even begin to drive the transistors.

Try changing jumper lengths from the radio to the amp. That will not change the SWR the radio sees, but it will rotate the complex impedance around that constant SWR circle to something the internal tuner may be able to handle. If the current length of jumper does not work, try one that is a quarter wavelength longer.

Do not run it with stages disconnected. That will create imbalances in the combiner and things will get hot. You should just try to match the input with an L network.
Last edited: May 12, 2022
Reactions: Shadetree Mechanic
B

It looks like there is an input matching network already... 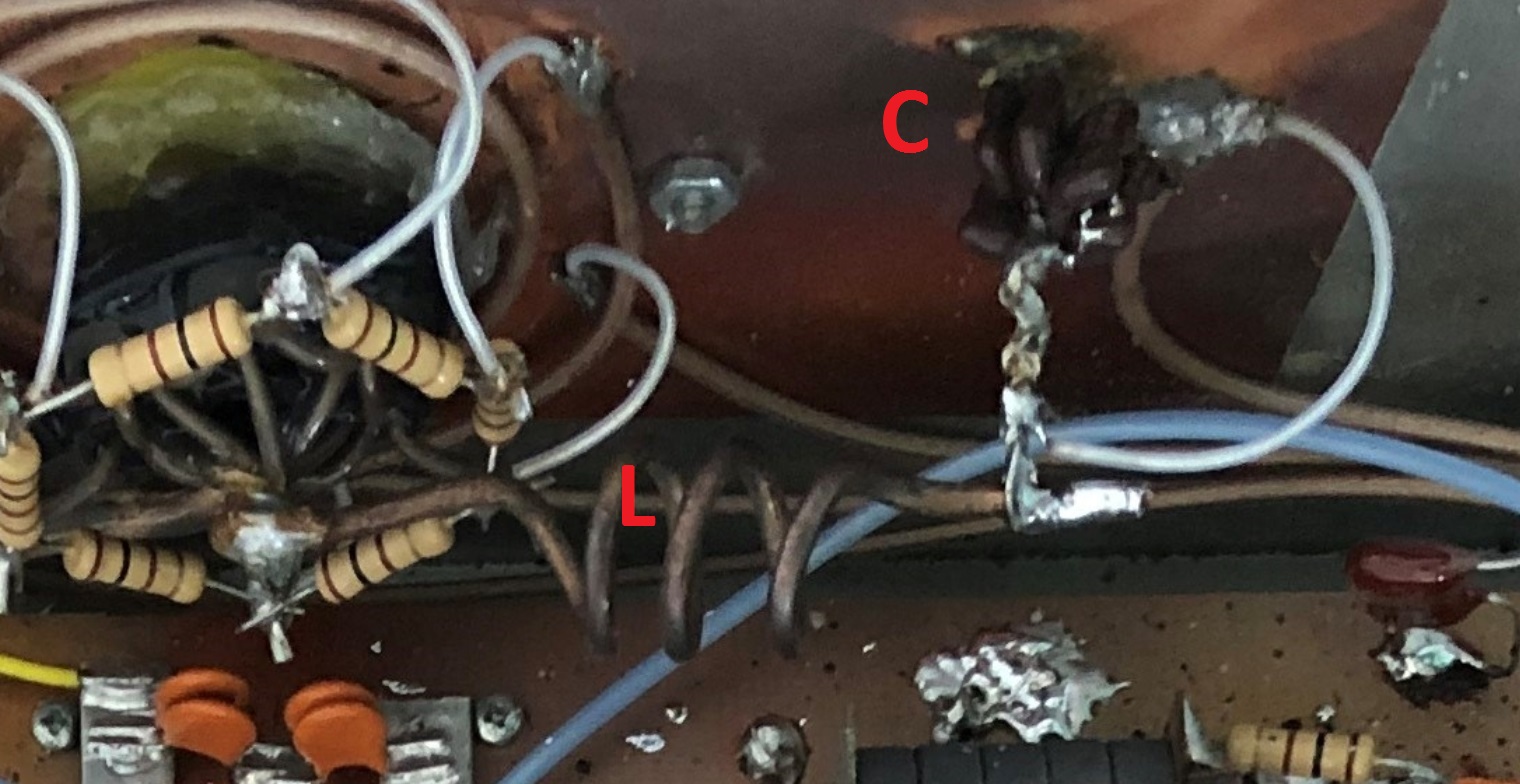 and you also have burnt resistors in the output combiner... 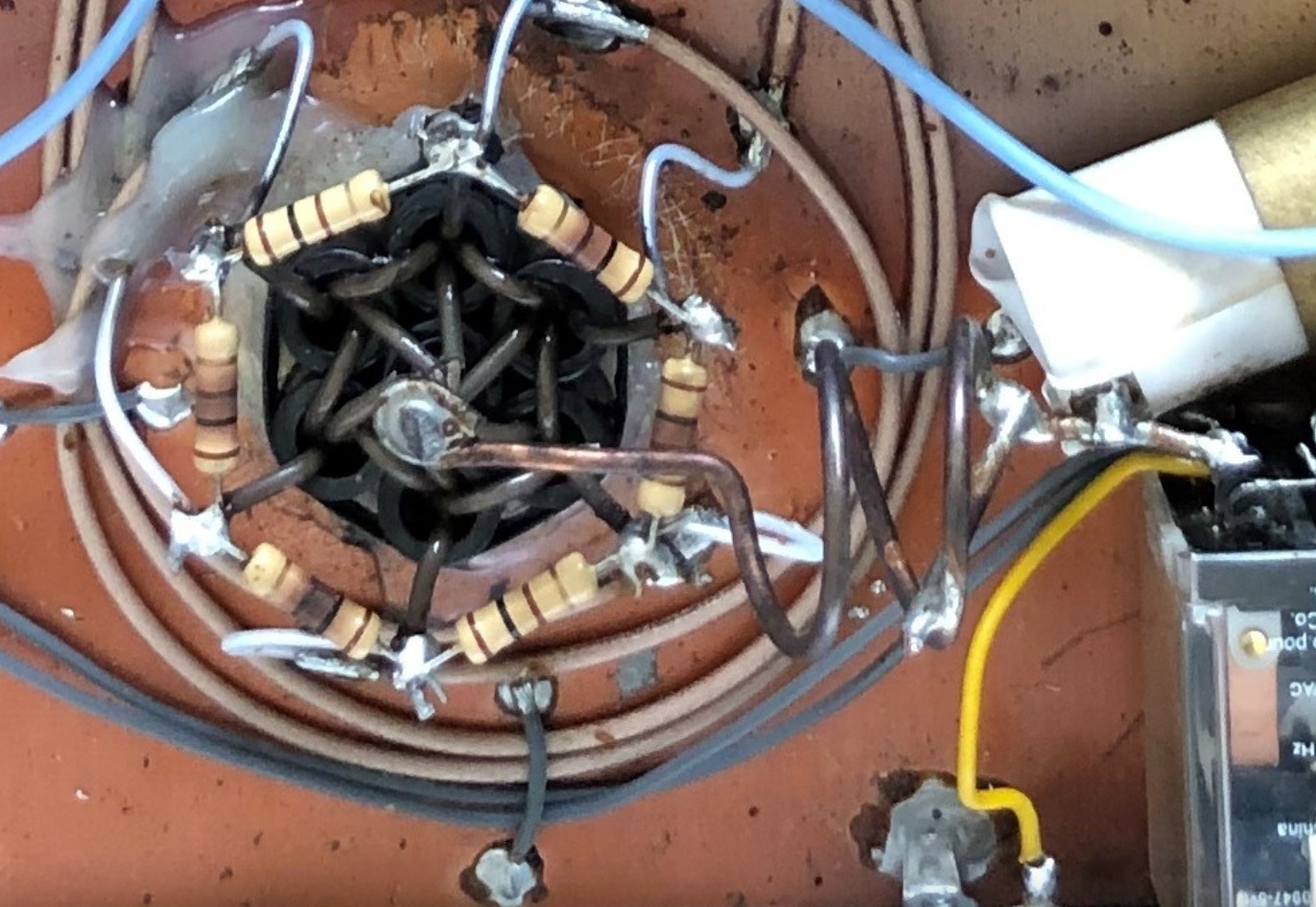 Yes, because a tuner needs to be the last component in line.

The built in tuner on the 7300 is only good for running the radio straight to the antenna and typically built in tuners only have a maximum high 3:1 SWR maximum tunning capability.

Your SWR below 1.5 or less is perfectly fine but if you feel better about a better match, better off tuning the antenna better.

A tuner works too but you'll need a high power tuner and they get costly.

Again, the tuner goes after the amp so think of the tuner as the antenna.
Reactions: CW61
C

Hmmm well she's been lit up before.

If you're going to bother fooling with squaring this thing away. Take the time and 3 bucks and replace all your balancing resistors.

Unless you have a FLIR to look at your combiners and splitters you're shooting in the dark with your burnt up artwork there
Reactions: CW61 and Shadetree Mechanic

That poor thing looks rough, is the top missing on a couple 2879's on the left hand side?

The question, of course, is how many? The more transistors it has, the more work it is to test every one of them. Until you do that, you just don't know how many are still working. The burned balance resistors only tell us that the power is out of balance from one set of four to the set on the other side of that resistor. Doesn't tell us why. Bad capacitors can also do this. But transistors are far more vulnerable, on the whole.

The phrase "rougher than a stucco bathtub" comes to mind.

Nobody as yet has mentioned 10-ohm smoke. There are 24 of those 10-ohm resistors in there, one on the base of each transistor going to ground. The calibrated eyeball is usually all you need to check those.

Hmm. Just had a thought. Dead transistors could be a marginal death sentence. Replacing just one or three probably won't permit you to match the new parts to the remaining old ones. The RF transistors are the original lead and beryllia type. Can't get the pre-2006 transistors any more. And all of them made since then are electrically different. Different enough to disrupt the match you need between the transistor on one side of the circuit with the one on the other side.

I have seen some "headache boxes" where the owner insists on mix-and-match using a collection of not-similar transistors. They tend to break down frequently.

I'm fascinated that it's biased a little farther from class c than the typical big box. I'm gonna experiment adding some bias to a 4 pill with 10R 15W resistors , 1N5820 diodes and some small electrolytic caps.
C

How the biasing is done in this 24 pill:
I would recommend a separate resistor for each transistor to prevent from ringing effects. And the capacitor should be an ceramic one...no Elko. 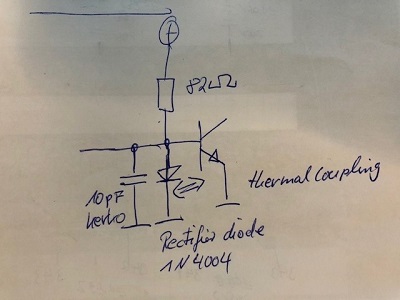 The diode should generate a constant current through the base. Therefore it is necessary that it is close to the transistor in order to have the thermal coupling.
The 1N5820 is a shottky diode which only can 20 Volt reverse Voltage. This will give up after a while. In the 24 pill there was a mixture between shottky and not shottky diodes and the shottkys were damaged.
73, Christian
Last edited: Friday at 4:08 PM
Reactions: BlackWolf42 and Shadetree Mechanic