They once were lost but now they're found. Got a question that prompted me to search for these pics, and somehow overlooked them. Figured they were a casualty of the last hard-drive crash ten years ago or so. Naturally I found them looking for something else.

Here is a procedure we apply to every Browning Mark 3 receiver that we service. The band selector may only have one tuneable band, and two "fixed" receiver frequency choices marked "XTL1" and "XTL2". Or it may be the later version with two tuneable bands, and only one fixed receiver crystal.

These pics are part of the conversion from the older one-band to newer two-band receiver. Most of our customers want to be able to hear above channel 27. Barkett sells the 31.72 MHz crystal needed for this expansion, along with a new receiver dial and the all-important "banjo" washer where the band crystals get their ground connection.

Just the same, none of our clients has used a fixed receive-frequency crystal since 1976. A local plumber had a FCC business license for 27.320 MHz. Had one-channel mobile radios in his service trucks, along with the LEGAL 100-Watt mobile linear his license allowed. Along came 40 channels, and his private business channel was now halfway between channel 31 and 32. He soon gave up and upgraded to Motorola FM business radios.

Anyway, the hookup on the rear of the selector, called "SW2" in the schematic has two mica capacitors mounted on it, and the tuning coil L5 used for dial calibration also connected through it. This is necessary to make a crystal work on the same oscillator circuit that uses the coil and tuning dial.

Just one problem. Any funny business in any of the switch contacts in SW2 cause the dial frequency to drift or jump. Or both.

I adopted a policy years ago to ditch the fixed-crystal circuit altogether, and hard-wire SW2 for tuneable receive only. Back in the day, adding a third tuneable band below channel 1 was popular, and that made this procedure necessary. Or at least attractive. No other way to use that third click of SW2 for a tuneable band.


Here is the rear of SW2 in an old-style receiver that had only the one tuneable band. One lug where the two mica caps connect is already being desoldered. The white wire with the red stripe has already been unhooked. We won't be using that wire. 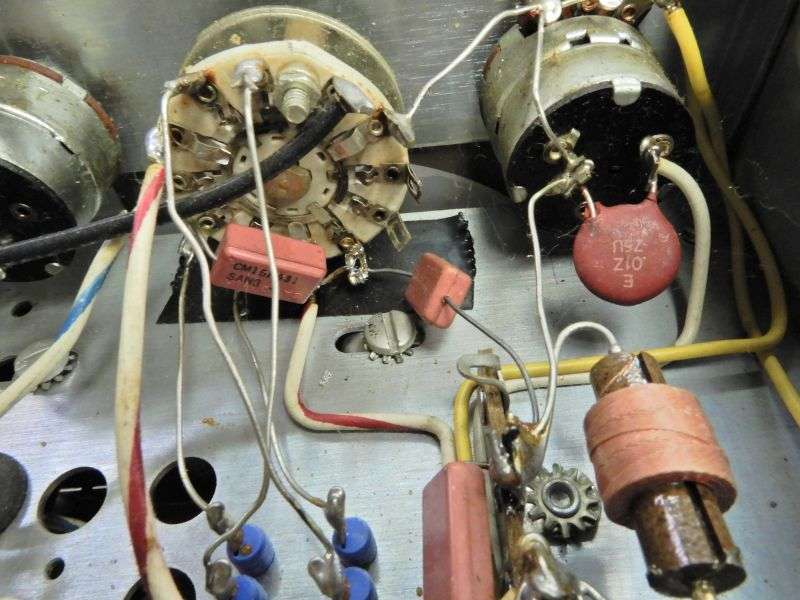 First one to come loose is C52B. It's the one that has one leg soldered to a ground lug to the rear of SW2. 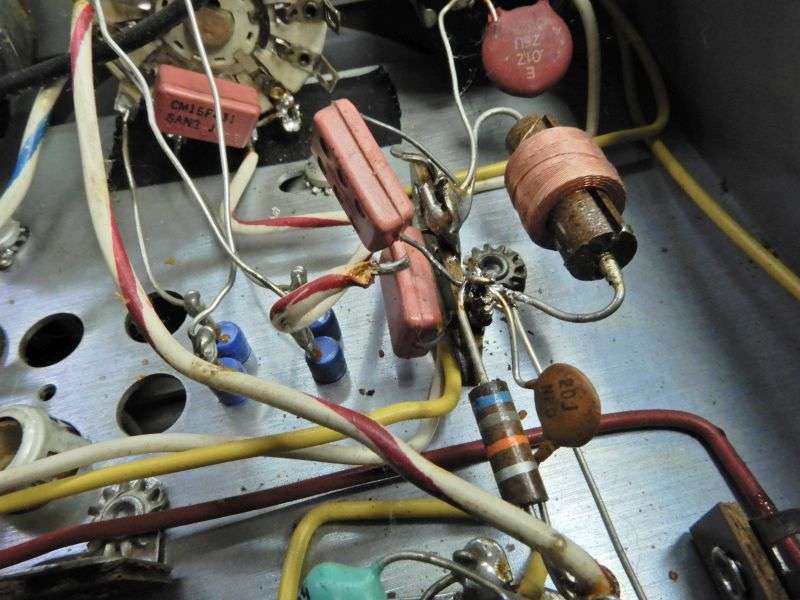 Now *carefully* remove C51A from the rear of SW2. If you break on lead wire from it you'll need a new cap. Just be nice. 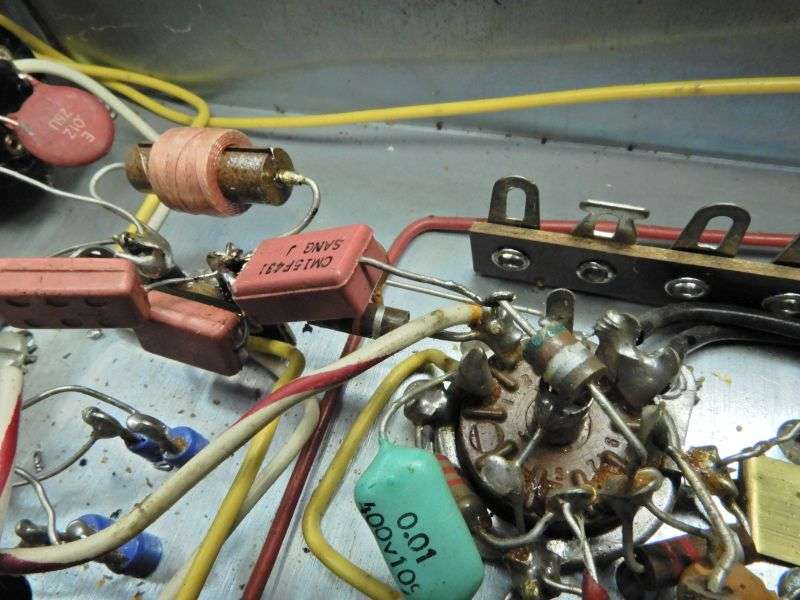 C51 is now strung from the tie-strip lug closest to V4 to pin 2 of V4. It may not reach, but can be lap-soldered to one of the component leads that already connect that tie-strip lug to V4 pin 2. 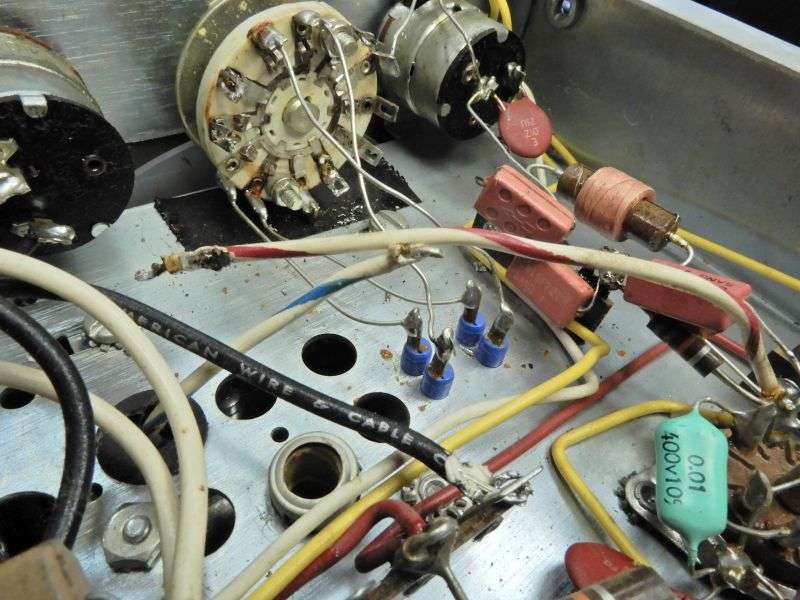 There is another white wire with a red stripe from V4 pin 2 to SW2. Cut the SW2 end of this wire so it's still attached to V4 pin 2. There is a white wire with a blue stripe coming from topside tuning coil L5 to the SW2. Cut it at SW2. Now shorten each of these wires, or just one of them if you like so they can be stripped and lap-soldered together. 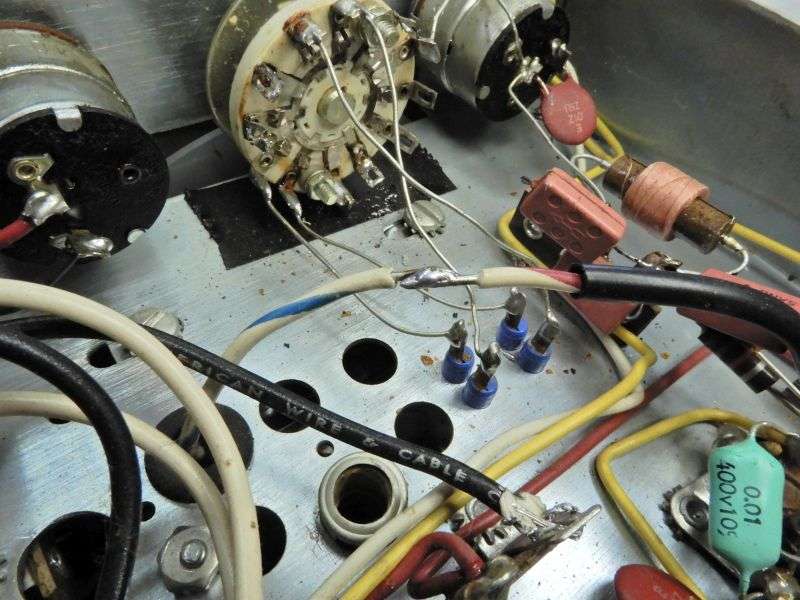 I always slide insulating sleeve over the splice. Probably not necessary, but we do it anyway.

The pics show no band crystals. For an old one-band Mark 3, installing them would be next. But I have work to do today. That part of the story will have to be part 2. If your radio already has two tuneable bands, you're done. This should fix quirky dial-stability problems, or at least reduce them.

Thanks for this lost mod. I notice that my receiver has some differences from the one shown in your photos. I have an extra white/red wire which leads back to V3. I also do not have any black wire attached to any lugs as your photo shows. In my photo, D52B has been removed. The xtal is also wired differently than the receiver in your photos.

A better look at where the "extra" white/red connects to SW2 and to pin 2 of V3.

You might have to give Chris a day or so to respond, he runs a full time repair shop that is extremely busy.


I would like to take a moment and thank Chris ( Nomad) for his continued help to the members here on the forum.
We are indeed lucky that he choses to share that here.

I do understand he is a busy guy. He has been of great help to me and many others here, so I too am very grateful for all of his wisdom. Just trying to give clear pics to make things easier to see. 73
Tom
Reactions: AudioShockwav

You're right. The missing stuff from my pics all has to do with the 31 MHz crystal-oscillator circuit. And that's what the 2nd half of what I started is meant to cover. Adding a second tuneable band to the original receiver requires you to add that long white/red wire. Tricky part is that unsoldering the 31.4 crystal from pin 2 of V3 can be trickier than it looks. The factory was sloppy about bending the crystal's wire lead too close to the body of the crystal. Would make the lead wire brittle there, and break off flush with the glass insulation. Very disappointing if you don't have a spare 31.4 on hand.

For that reason I have recommended buying both the 31.72 crystal and a spare 31.4 any time the "old version" receiver upgrade is done.

Discovered one other thing about that long white/red wire running from V3 pin 2 to the front-panel selector. Make sure it's stiff enough to remain suspended about halfway between the chassis deck and the inside surface of the bottom cover. That wire is long enough to form a capacitor to ground if it's too close to grounded metal. This can make a band crystal "lazy" and fail to start itself up every time.

Thanks for the pics.

So for me to complete the mod to eliminate C51A and C52B from SW2 with my existing receiver, having both CB and HF band, I would make the changes as you stated above but leave the long white/red wire to V3 pin 2 intact? One of thing that I've discovered while poking around is that if I move the position of C52B just a little bit it will definitely cause the frequency to jump. Not really drift, but jump erratically. Thanks again for taking the time to help with this. I've been trying to figure this out off and on for months now so I really do appreciate it.

Yep. Only one section of SW2 will remain connected, the one with the crystals and that long wire. Removing parts and wires from the other 3 sections of SW2 will now "hot-wire" the receiver for tuneable only.

(Edit)
Just remembered that only two of the four sections of SW2 are used for the fixed-tuneable selection. The fourth one has a thick black wire that provides the ground connection for the dial lamp. Shuts off the dial light when using a fixed channel. That black wire gets unhooked from SW2 and goes to a handy ground point.

Knew I'd forget something.

Excellent. I will complete the mod this evening after work and report back the results. BTW my Mark 3 does not have the black wire attached to SW2 and it does not appear that anything else had ever been soldered to the open lugs of SW2. That being said, my dial light has never shut off when going to xtal on SW2. It makes me wonder if Browning abandoned that feature on some production runs. Keeping my fingers crossed that this will solve my issue. Thanks again, Chris.

Sorry it took so long to report back but here it is. I completed Nomads mod and, holy crap, my bird once again can hear!!! Thank you Chris from the bottom of my heart. You are the man!! After carefully completing the mod and making sure that my 5V signal wire was not causing stray capacitance, (which btw it was!) my Mark 3 receiver is back locked solid on frequency. That is a dastardly feedback circuit that has no place being on a control switch. Thanks again for all of your help Chris. You are a life saver on this one!!!

Well, it appears that I raised the victory flag too soon. The drifting reciever is back at it. Uhhg!! It seemed to hold frequency for a couple of rag chewing sessions and then it started jumping around again this afternoon. At this point I'm hoping Nomad has the capacity to take this girl in for repair, unless anybody could think of something I'm missing?

Don't know if turning the main tuning knob reveals any skittishness as it's turned, but we soak a length of twine in alcohol, and wrap it once around the receiver-dial variable cap's rotor shaft at the very rear. The idea is to slip it between the butt of the shaft and the bronze 'brush' spring that rubs against it. That spring provides the ground side connection to the tuning cap. The twine gets pulled back and forth to scrub oxide and old lubricant where the two surfaces meet. A drop of clear silicone oil is a good idea once the solvent evaporates fully. If you use white cotton twine it will be easier to see how much the removed schmoo and oxide darken where it passed between the surfaces.

I haven't noticed any particular skittishness in the tuning dial itself but I will certainly give it a real good cleaning this evening. I've gotten myself some white nylon string from the hardware store this morning and I have some 99% Isopropyl so we'll see if it helps or not. Maybe some D5 after? I also ordered a NOS tuning dial from Greg, just in case. I'm also wondering about the dependability and stability of all those old molded micas. Would it be wise to change them all over to new silver dipped micas?

I don't see the molded micas fail very often. But nothing is fail proof. One tool to identify a mechanical link to oscillator stability is to "tune in" the dial oscillator's 4.6 to 4.9 output in a receiver that can hear CW and/or sideband. Tune in the dial oscillator's output for a decent tone pitch. A plastic probe poked around in that section of the radio will cause small changes in frequency when it's held near parts in the tuned circuit and then you draw it away. What you're listening for is any abrupt change in pitch. Poke and worry each part in the circuit and see if it prompts any erratic changes in frequency. If that wiper spring at the rear of the capacitor shaft is the cause, you'll hear erratic pitch changes with a small wiggle to the tuning knob. And if the pitch change is smooth and steady as you turn the tuning knob, that's not the cause.

I can tune that frequency in on my old Yaesu FT101 receiver. I will test the mechanical oscillator link tonight using that method. Thanks for that. I am also not 100% sure now if my new C50 trimmer replacement that I put in at the beginning of this whole thing was actually bad from the get go. I am getting some choppy reaction when trying to adjust C50. I have another one on the way just in case I got a bum one from Barkett.