Does anyone remember "Duck and Cover"?

Well, if you survive the drop and the crater, good luck in taking a shower to clean off all that radioactive material in the dirt, which that radiation can also be absorbed into the pipes - building materials and even affect water - so what would be the point?

You know you're going to have a Bad Day when...this pops up on everything you watch... 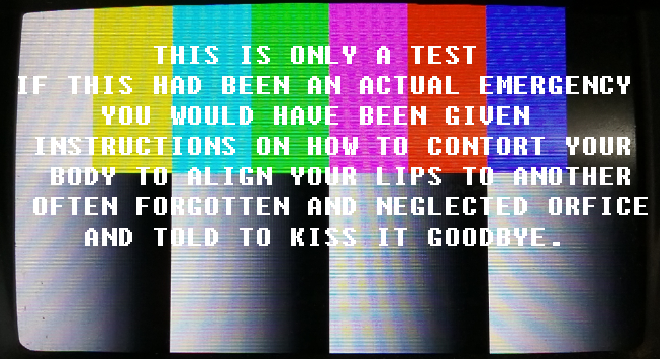 I do remember!
Reactions: Shadetree Mechanic

If that happens I am getting in the car and driving towards ground zero because once it starts I don't want to be around for the aftermath.
Reactions: Shadetree Mechanic, ForestRunner98, BJ radionut and 1 other person
B

I remember . In school and on TV if you had one.
Reactions: Shadetree Mechanic

Apparently we are closer to nuclear war than we are lead to believe. Be aware.

I remember. We often had drills in school. I was very young, but thought even then, hiding under the desk wasn't going to protect me.

If a nuke is incoming I hope it lands on my head.
Reactions: Shadetree Mechanic and Holydvr
B

There are a few things to know going into nuclear war:
#1 Unless you live within 10 miles from a target, you are not going to die. Get past that idea.
#2 70% of the population of Hiroshima survived, and over 160 people survived both blasts. Sure, the bombs are 100x bigger nowadays, but the blast still obeys the inverse square law and will not cause a 100x larger blast radius.
#3 Stay indoors for 2 weeks if you are in a fallout area. The scariest part if it decays to less than 1% its original intensity after the first 2 weeks. That is not to say the remainder is safe, but it does become possible to get out for short periods to gather things.
#4 Wash with soap, but DO NOT use conditioner! The conditioner will make the radioactive particles stick to you.
#5 There have been over 1000 surface nuclear tests in this country alone (and you are still alive), so don't assume the residual radiation will kill you if the blasts don't.
#6 Learn about halving thicknesses. This represents the amount of a given material that cuts gamma radiation in half. See chart here. You want the radioactive dust as far away from you as possible (inverse square law again), but if you need to be close to the falling dust, you need stuff in between you and the and that dust.
#7 In the next war, the bigger threat is atmospheric detonations. That means less radioactive dust being kicked up, so you have that going for you too...
#8 Don't assume gamma is the only threat. Most people are not afraid of alpha because it cannot penetrate paper. But lets say you eat it by accident, in that case, gamma is safer as it will mostly escape your body whereas you will absorb the full dose from the alpha emitter. I bring this up because many of the cheap Geiger counters cannot detect alpha (you want a pancake detector for that).

Schools didn't tell you to get under the desk because they thought a desk would save you from a direct hit, that's a silly notion. They did it because they were afraid of flying glass and possible structural collapse from being in the outer reaches of the blast wave. A desk back then had a chance at saving a kid from a roof collapse etc.
Reactions: Alabama Buckeye, barefootindian, Captain Kilowatt and 1 other person
T

Yes we had drills Showing us what to do. Bend over kiss your Ass Goodby. Wink
Reactions: Shadetree Mechanic

What I remember more was all the blasting cap warnings on tv.
Reactions: Shadetree Mechanic 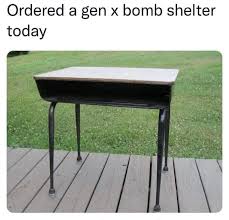 The gentleman that built (early 60s) and owned the house before us had designed a bomb shelter into the basement. It was mine and my brother's playroom when I was in the 1st grade. If the bomb had dropped we'd have had plenty of trains, slot cars, Erector sets and Lincoln Logs to play with. Don't remember any food and water however..............
Last edited: Jul 17, 2022
Reactions: G-Golly Wally, r carl, Shadetree Mechanic and 1 other person

Us Boomers were supposed to use those too.......

The nukes they have now are far more deadly and powerful than the atomic versions. If they start tossing them around, it'll like the movie A Boy and his Dog.