FrankenMaco, back from the undead.

Yes, back from the undead. This project got its start around seven years ago. We had found that the only viable way to deal with "competition" amplifiers that burned up 8930 tubes too soon was to convert the amplifier to the GU74b russky military-grade tetrode. Svetlana promoted this same tube as the "4CX800" in the nineties, trying to develop a market in the west for their power tubes. I won't say who built the amplifiers in question, but they were made in the late 90s when the military-grade 8930 and 4CX250R tubes were selling for 30 to 50 bucks each. The government dumped all of them they had over a few years. Made them plentiful and cheap.

Fast-forward 20 years, and those same 8930 and DX-393 tubes cost a mint. Besides, the hot-rod design of the amplifiers would wear them out prematurely. Wasn't an issue when they were fifty bucks. But now that the average is closer to 300 each, the incentives have changed.

The GU74b used to sell for under 200 bucks and replace two of the smaller tubes.

But now that Vlad the Inhaler has disrupted trade from that part of the world, the price of this tube is heading upwards even faster than it had been. This created the incentive to dust off a long-forgotten project, a tester for the GU74B tube. The higher the price, the more likely it is you'll get a dud or a worn-out used tube that was sold as "NOS". Gonna need a tester if I want to continue to repair this kind of amplifier.

Part of the reason the FrankenMaco got stalled and shoved onto a shelf was that the tech I assigned to finish it took a trip out west and disappeared.

Literally. He went camping solo in the Gifford Pinchot national forest, south of Mount St. Helens almost six years ago. They found his car and camp site, but he hasn't been seen since.

But since it was never completed in the first place, that makes it "back from the undead".

It started out as an amplifier, a proof of concept. The original Maco power transformer only gets us around 2000 Volts with a full-wave voltage doubler circuit in place of the factory's full-wave bridge circuit. This is nowhere near enough to see the tube's full capability, but should show us the condition of a tube. Don't need to break any wattmeter records, just need a way to judge the condition of a tube. 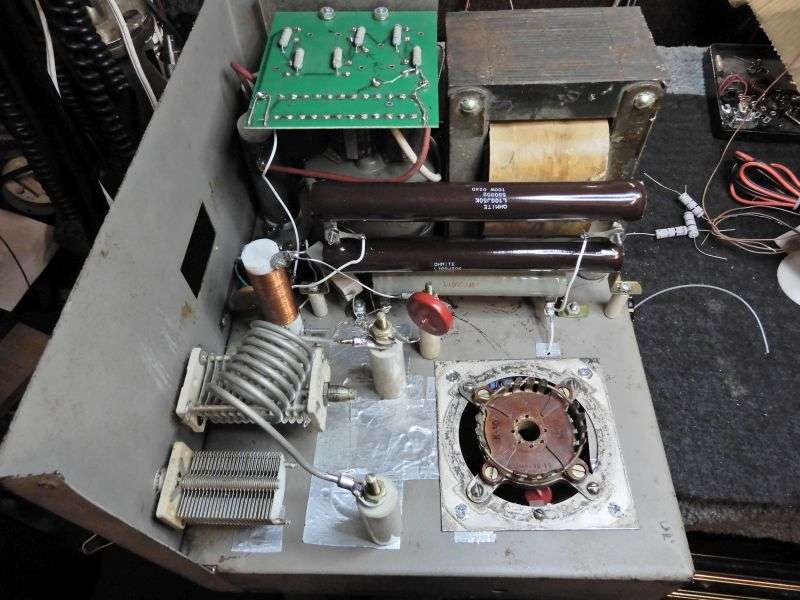 It's meant to allow "burn-in", powering only the tube's heater for a few hours or day. This serves to scavenge stray gas molecules that can build up in the tube's vacuum while in storage over the decades. A meter that shows the tiny leakage current out of the control grid will reveal the level of gas contaminating the vacuum. 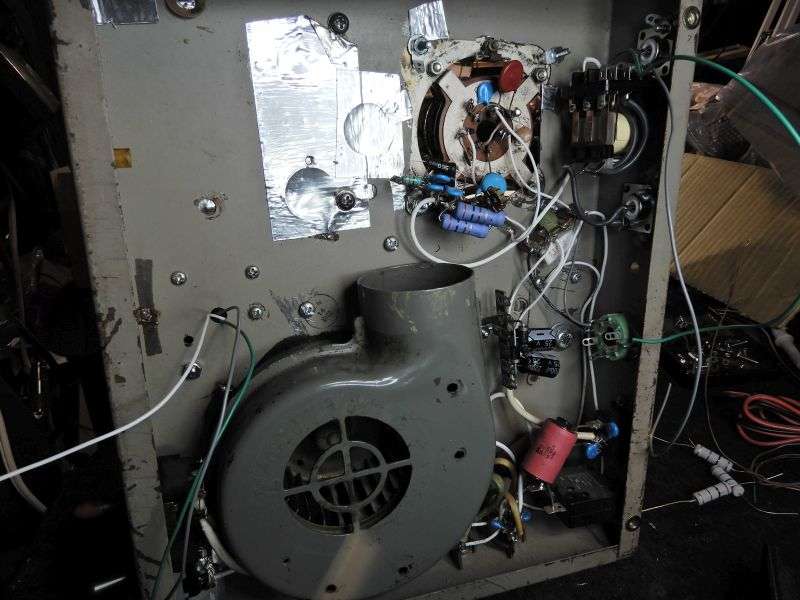 And it's a 27 MHz (okay, "10-meter") linear amplifier. Should provide a way to judge whether a tube is "strong" or "weak". We're using what Svetlana nicknamed "passive grid" input. Four 200-ohm resistors in parallel add up to 50 ohms. And the inductance of the small toroid coil serves to "cancel" the tube's capacitance from the control grid to the cathode and screen grids. 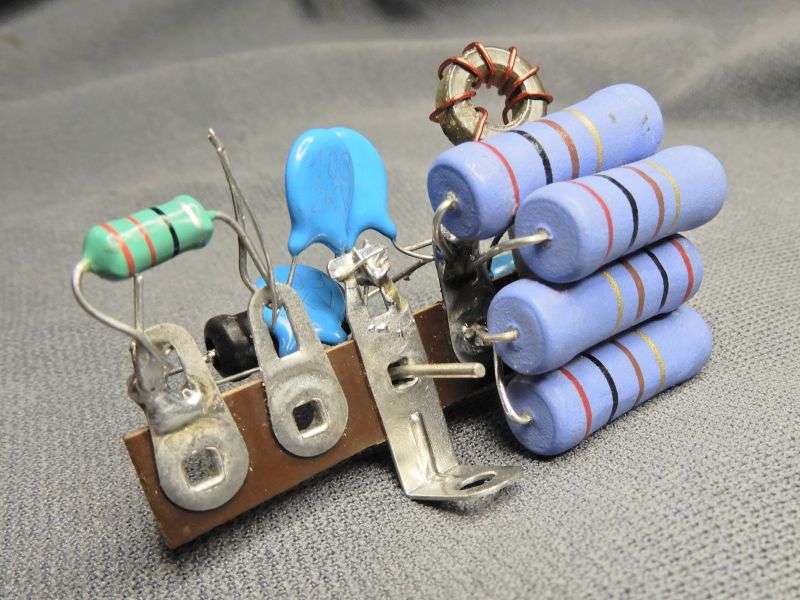 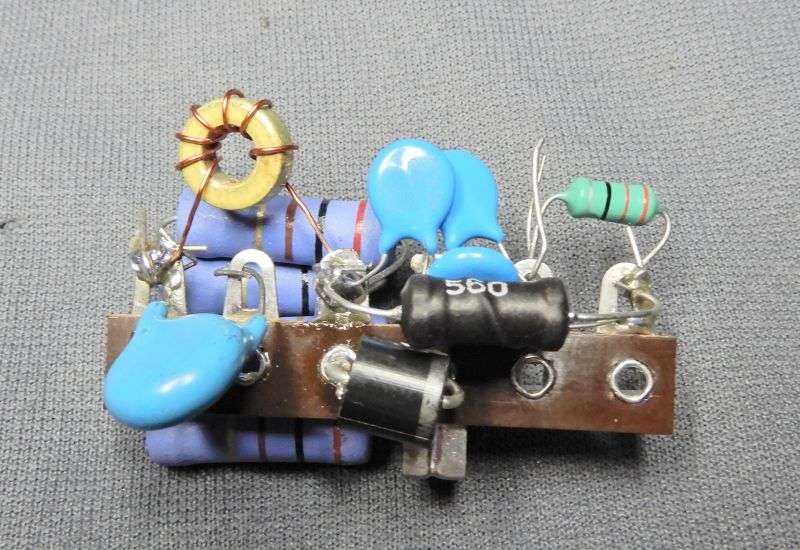 Not the prettiest grid circuit ever. All it has to do is work.

Next comes a panel with five analog meters on it. No room on the front of the 300 for all of those.

I've been testing everything from 4CX250B, to 8877 on and old Precision tube tester, with an external socket board and a 15 amp filament Transformer. With a bigger filament Transformer, you can test a 10,000 tube. All that's required is a known good tube, to determine the correct load value. If it passes emissions testing, it goes on the hipot tester. If it can pass both of these tests, the tube works. While no test is as good as a full power output test, this method offers a lot of flexibility to test various tubes.
Reactions: nomadradio, NZ8N and Shadetree Mechanic

Shockwave said:
external socket board and a 15 amp filament Transformer
Click to expand...

Definitely the way to go.

I really need to make an adapter socket for our tube tester. Or a few of them, more like it.

And for sure, the GU74b, but I like this solution better. Too extravagant to do this for too many different types, though. 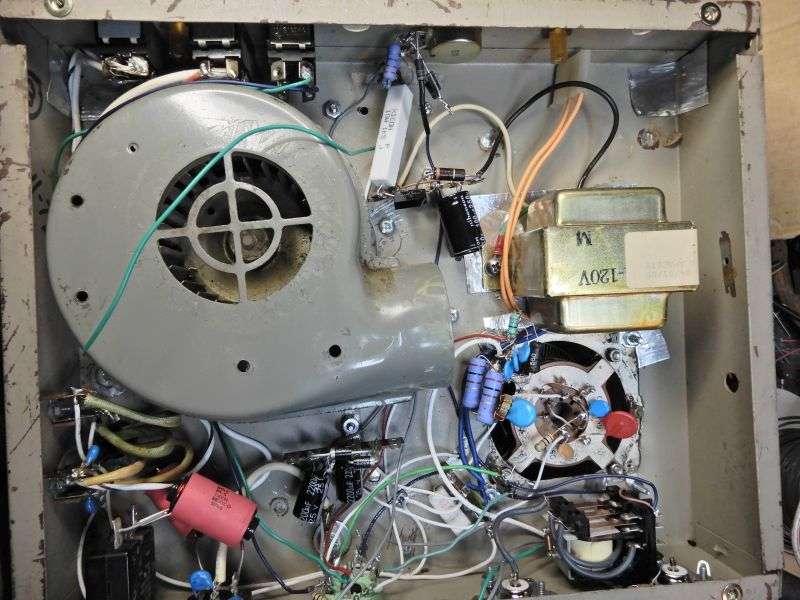